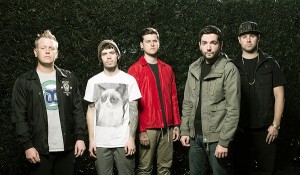 Metalcore fans beware: the following lineup may cause dizziness, dilated pupils and increased heart rate as A DAY TO REMEMBER, THE GHOST INSIDE and I KILLED THE PROM QUEEN announce Sidewave shows

Florida’s pop-mosh lords, A DAY TO REMEMBER are back and they will be bringing their crushing live show to Sidewaves in Sydney and Melbourne.

With 5 albums under their belt, each one further cementing the band’s reign as true leaders of the genre, ADTR effortlessly blend pop-punk riffs and earth-shattering heavy breakdowns. Their new studio album (released in Australia by 3Wise)

“Common Courtesy is not the end of this band. If anything, it’s their new beginning. “ – Rock Sound

“If you put everything you’ve got into something, it’s going to pay off,” says vocalist and co-founding member of THE GHOST INSIDE, Jonathan Vigil. And that’s the mantra for this Californian band’s killer live shows. However it’s not just the live arena where these guys excel as their latest album ‘Get What You Give’ proves they are one of hardcore’s brightest lights.

“This record sounds absolutely massive…saying this album is electrifying would be a massive understatement. – Absolute Punk

Finally, prepare for a re-launch of epic proportions, because I KILLED THE PROM QUEEN are back again with even more blood-curdling growls, tempo tantrums and thrashy, catchy riffs. After a few beak-ups, hiatuses, and members moonlighting in other bands, the band’s third release in its 13-year history, ‘Beloved’ , will finally be unleashed on fans this Friday Feb 14! With a show that’s sure to open up the circle pit from hell, IKTPQ are still staying true to what they’ve always done best – monstrous riffing, jackhammer drumming, roaring vocals and melodic overtures. “We’ve really extended ourselves,” says guitarist Jona Weinhofen, “But we’ve done it in a way where it’s tasteful and it makes sense with the music. It still sounds very much like Prom Queen.”