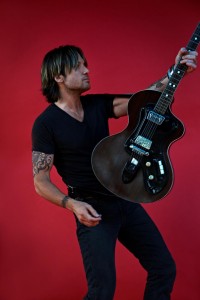 When it comes to an all energy show with world-class production, Grammy and ARIA Award winning Keith Urban certainly delivers, and this is exactly what Australian audiences can expect when Urban tours nationally in June 2014 on the Light The Fuse Tour Australia.  The all-new show will not only feature first-time performances of new music from his #1 album ‘Fuse’, but will boast a production size and scope that has become synonymous with Urban’s electrifying concert experiences.If Urban’s previous tour of Australia, the 2013 ‘The Story So Far Tour’ is any indication, as it was completely sold-out, then fans shouldn’t wait to buy tickets for the Light The Fuse Tour Australia!

Advance tickets for Keith Urban’s Light The Fuse Tour Australia will be available to all Visa Credit, Debit and Prepaid cardholders from noon (local time) Tuesday, 3 December 2013 until 5pm (local time) Thursday 5 December 2013 or until presale tickets sell out at www.visaentertainment.com.au

Tickets for the Light The Fuse Tour Australia go on sale at 9am (local time) on Monday, 9 December, from Ticketek: www.ticketek.com.au

Urban has given a preview of what you can expect on the tour here:

The shows will feature new music from Urban’s gold selling album ‘Fuse’, which simultaneously debuted at #1 in Australia, the US and Canada on release in September. Featuring the US #1 hits ‘Little Bit of Everything’ and ‘We Were Us’ as well as the new single ‘Shame’, ‘Fuse’ is Urban’s much-anticipated seventh studio album and his first in three years.

The Light The Fuse Tour Australia will follow Urban’s performance at the 2014 Clipsal 500 After Race Concert in Adelaide on Sunday March 2.

Tickets on sale MONDAY 9 DECEMBER, 9AM

For all official Keith Urban news and ticket information, go to www.keithurban.net