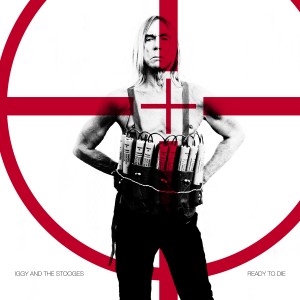 ”A real fucking group… they also make fucking records. They don’t just go and twiddle around on stage to make a bunch of fucking money” – Iggy Pop

Better 40 years later than never: The follow-up to the first record ever to bear the Iggy and the Stooges logo–the immortal proto-punk masterpiece Raw Power–will finally be out April 26, when Warner Music Australia and Fat Possum Records releases the all-new Iggy and the Stooges studio album, Ready To Die. The album will follow the band’s latest Australian tour (including Bluesfest appearances) by a matter of weeks.

Ready To Die finds Iggy Pop, guitarist James Williamson and drummer Scott “Rock Action” Asheton reunited for a full album of all-new material for the first time since the legendary Raw Power sessions, with Mike Watt filling in for the late Ron Asheton on bass. The results are the closest thing to a time capsule to 1973 – or at least to Iggy’s subsequent efforts with Williamson, including 1977’s Kill City and 1979’s New Values–that rock ‘n’ roll is likely to proffer in this millennium.

The new album’s opening one-two of Burn and Sex & Money pair sublimely blunt and self-explanatory subject matter with back alley razor-blade guitars and a troglodytic rhythmic stomp as intensely single-minded as Iggy’s lyrical statements of intent. Elsewhere on the album, anthems abound in the form of the most dead-on rallying cry for the lower-working-class dispossessed to date -the succinctly and aptly titled Job, as well as a title track that mixes a signature Iggy Pop mission statement of angry desperation with guitar pyrotechnics that recall those halcyon opening salvos of Search & Destroy.

Just as Iggy exhumed the original Stooges name when he reunited in 2003 with the Asheton brothers, the revival of the Iggy and the Stooges moniker that first appeared on the cover of Raw Power heralded the return of guitarist James Williamson to the fold in 2009, or as Iggy put it then “although ‘the Stooges’ died with Ron Asheton, there is still ‘Iggy and the Stooges’.” As far as the decision to record and release a new Iggy and the Stooges album for the first time since 1973, Iggy recently commented: “My motivation in making any record with the group at this point is no longer personal. It’s just a pig-headed fucking thing I have that a real fucking group when they’re an older group they also make fucking records. They don’t just go and twiddle around on stage to make a bunch of fucking money…”

Iggy & The Stooges’ Ready To Die will be released on Fat Possum Records through WMA on April 26.

IGGY AND THE STOOGES

With special guests: The Beasts of Bourbon