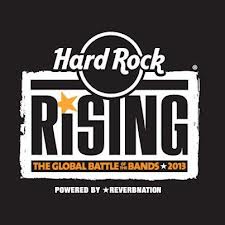 Announcing Call for Entries in 2013 Battle of the Bands

Orlando, Fla., January 7, 2013 – Hard Rock International continues its commitment to emerging musicians of tomorrow with this year’s Hard Rock Rising, the world’s largest and most far-reaching battle of the bands competition. Hard Rock Rising supports the musical careers of aspiring artists around the globe by giving one local band the opportunity of a lifetime – participate in a World Tour at Hard Rock Cafe locations, film a music video, record an album with Hard Rock Records and receive $10,000 in new gear.

“Hard Rock is eager to uncover another pool of budding talent and provide them with an international stage to showcase their talents,” said John Kirkpatrick, Head of Music & Artist Relations, Hard Rock International. “More than 12,000 bands entered Hard Rock Rising and nearly one million votes were cast by fans around the globe in 2012 – we hope the continued success of this program will catapult an emerging band to success and introduce their sound to Hard Rock’s worldwide audience.”

Hard Rock, in partnership with online music services company ReverbNation, will host an open registration for bands wishing to participate in the global battle from Monday, January 7, 2013, through Monday, January 21, 2013. This will be the second year that Hard Rock has partnered with ReverbNation.

“The influence of Hard Rock’s iconic brand – fused with ReverbNation’s extensive network of over 2.4 million artists in 250 countries worldwide – is a match made in rock and roll heaven,” said Mike Doernberg, CEO and Co-founder of ReverbNation. “We’re looking forward to once again helping to create breaks for aspiring artists around the globe.”

To register, future rock stars can visit one of 96 participating Hard Rock Cafe Facebook pages. Following open registration, fans decide who moves on to the live performance phase of the program and can vote on any Hard Rock’s city-specific, Facebook page by downloading free tracks from bands of their choice. For full rules and a list of participating locations, visit http://www.hardrock.com/.

After fans choose their favorites, participating Hard Rock Cafe locations around the world will host a series of live competitions featuring these local bands. One winner will be selected from each location by a panel of local industry judges. Selected local winners will be narrowed down to the top twenty-five bands worldwide via a second round of fan voting on participating Hard Rock Facebook pages. Once the top 25 are determined, a panel of music industry professionals; including Steven Van Zandt of the E Street Band, Live Nation Senior Vice President of Music Toby Leighton-Pope, and Hard Rock Records’ Artist Relations Executives John Kirkpatrick, James Buell and Blake Smith; will select the grand prize winner and two runner up bands.

About ReverbNation
ReverbNation provides over 2.6 million artists, managers, labels, venues, festivals/events and other music industry professionals with powerful, easy-to-use technology to promote and prosper online. The array of distribution and promotional solutions provides the hands-on tools and actionable insights that allow them to reach their goals in an increasingly complex music industry. The company operates worldwide with customers on every continent. Over 20 million visitors come to reverbnation.com every month. For more information, visit

About Hard Rock Records
Hard Rock Records is an independent music label created in 2012 by Hard Rock International to find, develop, and promote up-and-coming artists. Hard Rock Records provides artists an unparalleled opportunity, giving each artist on the label assistance with recording, production, marketing, promotion, distribution and touring in exchange for a one-year commitment to the label. At the end of that year, the artist walks away with ownership of any recordings as well as all the profits from their release. Hard Rock has no expectation for remuneration of any funds spent developing the artist. For additional information on Hard Rock Records, visit www.hardrockrecords.com.

About Hard Rock International
With a total of 181 venues in 58 countries, including 142 cafes, 18 hotels and 8 casinos, Hard Rock International (HRI) is one of the most globally recognized companies. Beginning with an Eric Clapton guitar, Hard Rock owns the world’s greatest collection of music memorabilia, which is displayed at its locations around the globe. Hard Rock is also known for its collectible fashion and music-related merchandise, Hard Rock Live performance venues and an award-winning website. HRI owns the global trademark for all Hard Rock brands. The company owns, operates and franchises Cafes in iconic cities including London, New York, San Francisco, Sydney and Dubai. HRI also owns, licenses and/or manages hotel/casino properties worldwide. Destinations include the companies’ two most successful Hotel and Casino properties in Tampa and Hollywood, Fl., both owned and operated by HRI parent company The Seminole Tribe of Florida., as well as other exciting locations including Bali, Biloxi, Chicago, Cancun, Las Vegas, San Diego and Singapore. Upcoming new Hard Rock Cafe locations include Melaka and San Jose. New Hard Rock Hotel projects include Aruba, Riviera Maya, Abu Dhabi and Shenzhen and Haikou in China. New Hard Rock Casino projects in development include Hungary and Northfield, OH. For more information on Hard Rock International, visit www.hardrock.com.

Hard Rock is looking for the next emerging band!

Want to play a world tour, record an album, shoot a video and win new gear?

Visit Hard Rock Cafe Sydney’s facebook for details on how to enter Hard Rock Rising, the global battle of the bands. Applications will be accepted from 7th January through to 21st January. The winning band from each city will move on to compete globally for the grand prize to play a world tour, make an album and video as part of Hard Rock Records and win new band gear!

Go to www.facebook.com/hardrockcafesydney to enter your band. This is an opportunity of a lifetime!