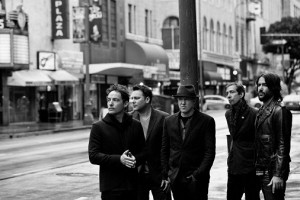 The Wallflowers have announced their long-awaited new studio album Glad All Over will be released on September 28, 2012 in Australia. The band’s new single, “Reboot The Mission,” is a Clash-inspired track with an unmistakable shuffle backbeat, featuring Mick Jones on vocals and guitar. The song is available on iTunes now.

Formed in Los Angeles, The Wallflowers rose to fame with their 4x platinum album Bringing Down The Horse, which featured four top charting singles including “6th Avenue Heartache,” “One Headlight,” “The Difference,” and “Three Marlenas.” The two-time Grammy Award winners went on to sell over 7 million records worldwide with a series of critically acclaimed albums before going on hiatus in 2007. During the group’s break from recording, Jakob Dylan released two solo albums, which also garnered significant praise,  2008’s Seeing Things and 2010’s Women and Country.