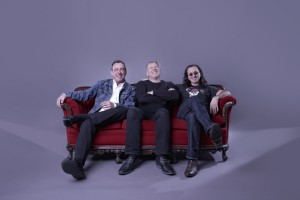 Legendary rock band Rush have unveiled details of its highly anticipated, new album, “CLOCKWORK ANGELS.”   This is the renowned trio’s first new collection of original material in over five years and their first studio release via Anthem/Roadrunner Records. “CLOCKWORK ANGELS,” the band’s 20th studio album, will be released on June 8th .

The band is sharing an advanced taste of the music with a hard-riffing album trailer based on the “Clockwork” cover art on Billboard.com .

The recording of “CLOCKWORK ANGELS” began in April 2010 with Grammy Award winning producer Nick Raskulinecz (Foo Fighters, Deftones) – who also collaborated with the band on their last studio album, 2007’s “SNAKES & ARROWS.”  Rush co-produced both records.  The first two songs, “Caravan” and “BU2B,” were completed during that first session at Nashville’s Blackbird studios and performed nightly during the wildly successful Time Machine Tour, which ran from June 2010 to June 2011.  Work on “CLOCKWORK ANGELS” resumed in the fall of 2011 at Revolution Recording in Toronto after the tour’s finale, with additional strings (arranged by David Campbell) recorded at Hollywood’s Ocean Way Studios earlier this year.  Lyrically, “CLOCKWORK ANGELS” chronicles a young man’s quest across a lavish and colorful world of steampunk and alchemy as he attempts to follow his dreams.  The story features lost cities, pirates, anarchists, an exotic carnival, and a rigid Watchmaker who imposes precision on every aspect of daily life.  The novelization of “CLOCKWORK ANGELS” is being written by science fiction writer Kevin J. Anderson in collaboration with Rush drummer and lyricist Neil Peart.

Rush will herald the release of “CLOCKWORK ANGELS” with a new single “Headlong Flight” landing at radio on April 20th.