Richard Marx new CD ‘Inside My Head’ out June 2012 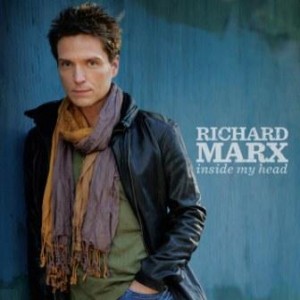 RICHARD MARX TO RELEASE NEW CD EXCLUSIVELY IN EUROPE: ‘INSIDE MY HEAD’ RELEASED ON FRONTIERS IN JUNE

Frontiers Records is honoured to welcome Richard Marx to the label for the exclusive release of “Inside My Head” – a 2 CD album set featuring rare and new material along with new recordings of his greatest hits – on June 1st in Europe. The first single “Wouldn’t Let Me Love You” will be released digitally on May 1st and can be exclusively streamed in full on the Frontiers Records webradio www.frontiers.it/webradio. A video clip is in the works.

A gifted singer and consummate songwriter Richard Marx has left a powerful mark on the music industry over the past 20 years. With 30 million records sold, 3 Grammy Awards nominations, a Grammy Award for “Song of the Year” and an American Music Award nomination for favourite male singer Marx, who has written fourteen #1 songs and had thirteen US #1 songs on the Billboard charts, has remained a fixture on pop and adult contemporary radio for years.

Marx was the first male solo artist in history to have his first 7 singles reach the top 5 on Billboard’s singles chart, including the 1 hits “Hold On to the Nights,” “Satisfied” and the worldwide classic “Right Here Waiting.” This feat remains unchallenged. He has also emerged as a first rate producer working with some of the biggest names in the music business including *NSYNC, Barbra Streisand, Josh Groban, Kenny Rogers, Sarah Brightman, Lara Fabian, Sister Hazel and The Tubes among others. More recently, he has written and produced records for Daughtry, Leann Rimes, Emerson Drive, Natalie Cole, Keith Urban, Kenny Loggins, Michael Bolton and actor Hugh Jackman.

The first CD of the “Inside My Head” set is a new studio record. It features two bonus tracks as well as collaborations with some of the most talent singer songwriters in the business including Chris Daughtry (“Had Enough” and “On The Inside”), Chad Kroeger of Nickelback (who also co-wrote “On The Inside”), Matt Scannell of Vertical Horizon (who played and co-wrote “Always on Your Mind”), Jason Wade of Lifehouse (who co-wrote “Had Enough”, also released by his band on “Smoke and Mirrors”), Fee Waybill of The Tubes (“Come Running”), Dann Huff (co-producer and guitarist on “Loved”) and many others.

Marx said: “I’m excited to be putting out a new release in Europe. My fans there have been incredibly loyal and I hope they like this new music and I hope to be back over touring there soon.” Marx added: “I wanted to have new recordings of my classic tracks because, while they were all fun to revisit and sing and play again, in a few cases I felt they needed some updating. After playing these songs live for so many years I wanted to incorporate some of the ways the songs have evolved but still retain what people seemed to like about them to begin with.”

“Inside My Head” will be released in a lavish digipak edition and will include the following songs:

CD 1: Had Enough; Wouldn’t Let Me Love You; Like Heaven; On The Inside; Through My Veins; Always On Your Mind; Loved; Come Running; All Over Me; Scars; Done To Me; Over My Head; Part of Me.

CD 2: Don’t Mean Nothing; Should’ve Known Better; Endless Summer Nights; Keep Coming Back; Take This Heart; Hold On To The Nights; Angelia; Hazard; Too Late To Say Goodbye; Satisfied; Right Here Waiting; When You Loved Me.