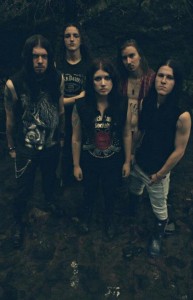 From Official Bio:  Take your hair out, get a flask ready, and read on. If you blasted Black Label Society and W.A.S.P. simultaneously through two stereos and stood in the middle of an epic desert, you’d get exactly what you’re here to find out about, Galactic Acid.

Instant hits on the scene early 2010, the band was quick to record their first EP Slide, Slide, Slippedy Slide. After battling to the finals of QLD’s band competition, shooting their first video for Ol’ Rock Betty and scoring the support slot for the failed Metal Health tour (L.A. Guns can tell you how that turned out), they set to focusing on writing, studying and preparing for new sounds. Recorded at Oiduts Studio in Carrara the Southbound EP features a punch of opening tracks of pure raw rock, descending into southern grooveville. This May 2012 will bring the EP and the band to new cities and experiences on the tour to release this hefty bitch.

Recently the Hard Rock Cafe brand worldwide ran a battle of the bands compeition to win the chance to play at ‘Hard Rock Rising’ in Hyde Park in London where the legendary Bruce Springsteen will headline. One of those bands in Australia with a chance of winning the Hard Rock Rising competition is Galactic Acid from the Gold Coast who took out the comp at the Surfers Paradise Hard Rock.  You can vote for them by clicking HERE and who knows what may happen for these rockers?!

Let’s start with the basics first – for those that aren’t aware of the band, what brought the band together and what is the inspiration behind the band name?
There was no way I wasn’t going to execute my vision of singing in a band. I brought Ben and Bryan around to jam out some riffs. We moved house and jammed, just us three at first in lounge rooms where everyone would come to drink including Alex and Scotty. Desperately seeking a bassist and drummer I was eventually unable to ignore that this 15 and 16 year old were a perfect fit for us and in years to come it wouldn’t matter. That very week we had the first jam, within two weeks had a set and a month after bringing them in I had booked our first show. As for the name, we couldn’t think of anything, and Bryan said one night ‘I’ve thought of a name, Galactic Acid’. Now… we can only guess how he came up with that one…

You have twenty seconds in an elevator to try and convince someone to listen to your music, what do you tell them?
I’d just introduce myself, offer them a drink and tell ‘em to come party sometime. They can make up their own mind for themselves. People aren’t stupid, they know when they’re being sold to, and they don’t appreciate it. They aren’t going to give a rats’ arse if they don’t know you or haven’t heard of you. Our friends are our fans, our fans are our friends.

Can you introduce each member of your band and give us a rock ‘n’ roll fact or myth about each of them?
Dual lead guitarists Bennii G & Brutal B plant trees for a living, Ben had this to add: ‘Brutal B was on acid when he made the name’. Tree huggers. Scotty the drum machine – all the ladies asked to put him on lay-by. Alex the bass man – accidentally snorted a line of acid instead of coke and tripped for days, he and Bryan went busking for beer money. And well I’m Dani the vocalist, I’m a lightweight when it comes to drinking, seven drinks and I’m paralytic.

As a finalist in the Hard Rock Rising competition where you could possibly be supporting Bruce Springsteen, among others, here’s your chance for a sales pitch, why should people vote for you?
Because we rock the stage as a team. When’s the last time you’ve seen a band like that other than KISS? They wear costumes to sync with each other it’s obvious when we’re together. You want a full stage experience (if you can survive the pit) then you’d sure want to see us play.

Looking at the big picture, if you were to win, what would be the one thing you’d take away from the experience?
That trip on the plane, together. Would be (if we win) the first time we properly tour. Just travelling somewhere together, and London’s Hard Rock Calling Festival for that matter! Would just be a great affirmation that whatever we’re doing that people like, it’s working.

Now for those that haven’t yet seen you perform before, what can people expect from one of your live shows?
USE OF THE STAGE! Man I’d run all over that thing, it would be so great to play on a large stage. Scotty knows how to get an audience screaming at the back there and the three string players, well they’d pretty much be having sex with each other.

You’re about to release your new EP, what can people expect from this new release?
The Southbound EP really leads you into the direction we’re heading, it starts off more blues speed rock then delves the last tracks into southern grooveville. They’re four strong that’ll really knock Ol’ Rock Betty off the radar.

With an EP out in 2010, how do you feel you’ve grown as a band in the time between releases?
Well in the last two years, you could say we’ve hit a few milestones, in the way we’ve grown together and the fact we’re still together. Not one member has left or has plans to leave. If they did I’m just not sure it would be Galactic Acid anymore.

In terms of your song writing, what do you consider to be the most important ingredients that make up a Galactic Acid song?
Sift bags of destruction brutal and Benniis improvisation. Life experiences, you buy a new album, watch a show, run out of money, party on, and gain something new to sing or write about. We want you feel the bluesy southern rock n roll drinker ignite inside of you and you will need a goddamn drink! Dammit! You’ll invite your friends over for a lounge room party and whip out some guitars, blast some Zakk and make your neighbours cry (it happened).

Both lyrically and musically, what or who inspires/influences your music the most?
Us really, we all listen to a lot of bands, but I know lyrically I write what I experience and see in the members and our fans, our lifestyle. Musically it usually begins with a good riff and builds from there, inspired by Black Label Society or some old blues dudes.

So you’re having a rock and roll dinner party, (more party than dinner) and you can invite 5 rock stars, living or dead, who would they be and why?
Dani – ‘Off the top of my head, Layne Stayley, I think we could have a mad D&M’.
Sift bags of destruction (B&B) – ‘Dimebag cause he’s a bad motherfucker’.
Alex – ‘I’d go to dinner with Ace Freehley, he seems like he’d have the best sense of humour and the most down to earth member of KISS, we could get fucked up and party for days, fuck dinner’.
Scotty – ‘I’ll have to pick Benny Greb, the guy is a drumming GOD!’.

Lastly, here’s a chance to gaze into your crystal ball. By the end of 2012, Galactic Acid will have:
1. A booking agent (or Dani will off herself)
2. Consumed much beer
3. A long life on the road

Vote by clicking on the banner below…