Slash to release second studio solo album on May 18, 2012

SLASH TO RELEASE SECOND STUDIO SOLO ALBUM ON MAY 18, 2012

SLASH–the iconic, Grammy-winning rock guitarist and songwriter–is currently in a Los Angeles studio putting the finishing touches on his second solo album.  The as-yet-untitled disc is due out May 18 on SLASH’s own label Dik Hayd International via Sony Music Australia and will follow his 2010 debut album Slash and his November 2011 first-ever live  solo album, the two-CD/DVD set Made In Stoke 24/7/11. The Slash album debuted on the ARIA Album Charts at #3 and with 3 in-market visits within the first 12 months of release, SLASH achieved Platinum sales for his debut solo album in Australia. Internationally the album hit the #1 position on iTunes in 13 countries and achieved Top 5 positions chart positions in over a dozen major territories including a #3 debut on the US Billboard Top 200 Chart. 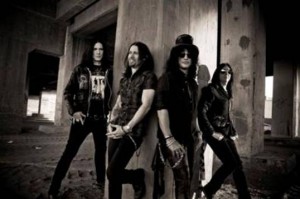 For the new album, SLASH—along with and his bandmates Myles Kennedy (vocals), Brent Fitz (drums) and Todd Kerns (bass)–have teamed with producer Eric Valentine, who also produced the Slash disc. All the songs were written together by SLASH and Kennedy, and cameras have been rolling throughout the entire making of the album. Check out exclusive behind-the-scenes footage airing weekly beginning today at the bottom of this post. SLASH also talks about the album and forthcoming tour (dates TBA) this Q&A:

Looking at all your Twitter updates, you sound really pumped about the new disc. This time around, you and Myles wrote all the songs and he sings lead on all the tracks.  What inspired this scenario since your debut solo album featured multiple vocalists (including Myles on two songs)?
Well having Myles sing on the first record inspired me to take him on the road, then taking him on the road inspired me to have him sing on the whole record. So yeah the tour last year definitely inspired the decision for him to sing on the new record. He has a really broad range.  He is just very musical as far as his melodic style is concerned and he’s also very lyrical and just a really powerful singer. There’s a lot of positives about the way he sings.

Perhaps you want to talk a bit here about your other bandmates and what they each bring to the sound?
There’s Brent who is probably one of the best drummers I’ve ever played with–he has a great way of playing very powerful rock n roll while still being able to keep it behind the beat and sexy. And then Todd has got to be one of the most overall talented musicians I’ve worked with, just a really great bass player. Todd’s very quick in the studio, a quick learner and creative as a writer; on top of that, he’s also a great singer. 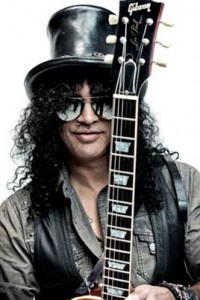 Beyond you and Myles writing all the songs and Myles singing all the leads, in what other ways is the new album perhaps different from your debut solo album?
Myles and I basically collaborated on the new material.  The main thing is we wrote these songs together which is a big difference from the last album where I wrote each song with all of the different collaborators. The whole creative nucleus is between Myles and me. On top of this, the whole rhythm section of Brent and Todd brings something to the table and changes the dynamic completely from the last record–it’s much more cohesive.

With your record company Dik Hayd Records, you remain an independent artist and work with major companies for distribution.  Can you talk about how you as an artist benefit by this scenario in these interesting times for the music industry?
It puts me more in the driver’s seat of how I want to market the record, but even more importantly than that, I’m not giving half of everything that comes in on the album to the record company.

Eric Valentine returns as producer for the new disc.  What do you feel he brings as a producer to these songs and the overall approach?
The first thing we always talk about with Eric is he’s an extremely gifted musician, but he is basically as talented an engineer, so it makes for a great combination as a producer. As a person he’s easy to work with–he’s very patient and he lives and breathes what he does.  That’s a lot like how I am, we’re similar; I can call him at any moment and ask him a question or share an idea I have with him.  He’s always in his element and it’s something that I can appreciate.

You toured the world seven times with the last album.  What are your tour plans for the new album?
Right now we’re starting off with radio shows in the states and then we’ll do as much of Europe as possible. We’ll also tour in Asia and Australia, and try to hit South Africa this year as well as India and a couple other spots.  Trying to just broaden our horizons a bit.

About SLASH: Slash is widely considered one of the greatest rock guitar players of all time. He has received countless accolades and awards including his forthcoming induction into the Rock and Roll Hall of Fame set for April 2012. In 2007, Slash was inducted into Hollywood’s RockWalk (located in front of Guitar Center in Hollywood) alongside his idols Jimmy Page and Jimi Hendrix. An original member of iconic rock band Guns N’ Roses, the Grammy-winning Slash helped the band create signature sounds like the guitar riff of #1 hit “Sweet Child o’ Mine” and “Welcome To The Jungle.”  The band dominated the 1980’s and 90’s music scene selling more than 100 million albums worldwide and ushered in a decade of hard-charging rock music. After leaving the band, Slash went on to critical acclaim in his personal project Slash’s Snakepit, and global success with the supergroup Velvet Revolver.  He has been widely sought after by the biggest musicians of all time, performing with everyone from Michael Jackson to Stevie Wonder to Ray Charles.  Slash recently landed on the top of the charts with his first true solo album, Slash.  In addition, Slash was honored by the Hollywood Chamber of Commerce who named him as an official selection for 2011 to receive a star on Hollywood’s iconic Walk of Fame. In February 2011, he performed at the Super Bowl XLV half time show, seen by more than 106 million people, becoming the most-watched program in U.S. television history (Nielsen Co.).