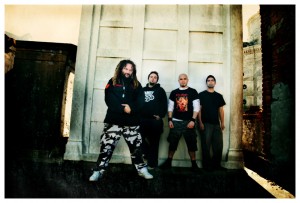 THE BAND WILL CELEBRATE 15th ANNIVERSARY WITH A NEW ALBUM

2012 will see the release of Enslaved, a brand new Soulfly album, which will be their eighth overall. While many bands barely make it to a third album, the Max Cavalera-led collective is still going strong two decades deep. 2012 also marks the band’s 15th anniversary of making a tribally-influenced metallic racket and what better way to celebrate than with a new record? The album will be released via longtime label Roadrunner Records, which has been Soulfly’s home for the course of its career. The label has also been Cavalera’s home for the duration of his career, which began in the ’80s as a member of Sepultura, who essentially rewrote the rules of heavy music when they arrived on the scene; Max continues to do the same today.

The song remains insane for Soulfly, as does the lineup. The powerhouse lineup features Max and guitar dynamo Marc Rizzo, with Static-X’s Tony Campos taking up the bass. The lineup is rounded out by drummer David Kinkade, a new school, extreme skinsman whose brutality behind the kit brings a new flavor to the band.

Enslaved was recorded at Tallcat Studios in Phoenix, Arizona and was produced by Zeuss, the seasoned knob twiddler behind some of the most notable bands in metal today, such as Shadows Fall, Hatebreed, The Red Chord and more. Cavalera also shared production duties.

As is customary with Soulfly, the band will introduce some new and unexpected elements into the mix, including a guest violinist. Soulfly also collaborates with two metal veterans: Dez Fafara of Devildriver and Travis Ryan of Cattle Decapitation. With Dez and Max sharing a longtime connection through the Roadrunner family, it was only a matter of time before Fafara guested on a Soulfly album. Meanwhile, Ryan said it was “an honor to receive a call from someone you had pictures of on your wall as a kid.”

Cavalera also wrote a song “Revengeance” about his slain stepson Dana, whose death was the catalyst for the creation of Soulfly. He partners with his sons Igor and Richie on vocals, while his other son Zyon plays drums. It is the first time Max has performed with three of his sons.

The band tracked 14 songs, 11 of which will be on the record, with the other three being made available for the special edition. Track titles are as follows: “Resistance,” “World Scum,” “Intervention,” “Gladiator,” “Legions,” “American Steel,” “Redemption of Man By God,” “Treachery,” “Plata O Plomo,” “Revengeance,” “Chains,” “Slave,” “Bastards” and “Soulfly VIII.” Please note this is not the final track sequencing.