Soul Seller – Back To Life 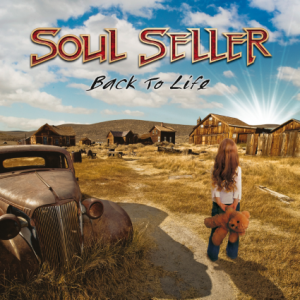 In 25 words or less: As with almost everything being released by the label Avenue Of Allies these days, this is a quality release definitely worth checking out.

Italy’s Soul Seller first started way back in 1999 with brothers David and Mirko Zublena and here in 2011, with many line-up changes, comes their first album release, Back To Life.  Having released a couple of demo CD’s back in 2002 and 2005, the band have flirted with melodic rock, hard rock, glam rock and 70’s rock, before settling on what is in essence a real mix of all those styles, but with the emphasis most definitively being on harder edged melodic rock.

Given my love for melodic rock, it’s really a no brainer liking an album such as Back To Life.  Sure, the opening trio of Wings Of Freedom, Change Your Heart Tonight and All I Can Promise sound like (insert your favourite melodic rock band), but these are damn catchy undeniable, up-tempo melodic rock corkers.  The type of songs that if you heard in isolation would have you going “who the hell is this band”.  With a seemingly endless abundance of new melodic rock/hard rock/AOR bands originating from Europe these days, it seems that having some “name” people involved is an essential pre-requisite to try and attract some attention.  In this case we have singer Oliver Hartmann (Avantasia, ex-At Vance) doing a duet on the big riffed rock Keep On Moving.  Incidentally, production comes from Alessandro Del Vecchio(Edge Of Forever, Eden’s Curse, Lionville, Shining Line) who seems to be popping up on virtually everything these days with a melodic rock/AOR flavour!

Old Hero’s Prayer with a chorus that never wants to end is very Bon Jovi’esque with the vocal styling’s and delivery of Michael Carrata, not to mention the song structure… my favourite song on the album.  The band really deliver some harder edged rock on Back To Life, Rock Still Stands and New Power Day, and there’s the obligatory ballad in Hell Of Tears.  The interestingly titled Beautiful Heretic’s Dream closes the album with a real epic 70’s classic rock type feel.

Back To Life is release that will no doubt be overshadowed by releases from higher profiled bands.  But as with almost everything being released by the label Avenue Of Allies these days, this is a quality release definitely worth checking out.

Check it out if you like: Harder edged melodic rock