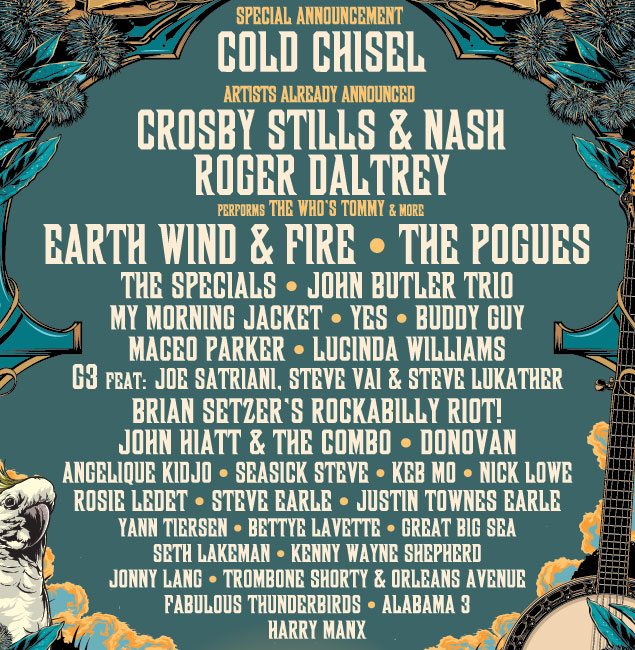 COLD CHISEL to headline Bluesfest!
Bluesfest is excited to announce that COLD CHISEL will headline the 2012 event, with the legendary Australian band’s exclusive festival appearance closing the main stage on Thursday 5th of April 2012.
It will be the first time that an Australian artist has ever headlined this iconic musical event.
Bluesfest’s announcement is testament to the special place Cold Chisel’s music has come to occupy in Australian hearts and minds.
The band’s record breaking Light The Nitro tour is currently drawing to a close, with a final gig scheduled for Brisbane next Tuesday night. The tour has been the biggest ever by an Australian-based band; drawing nearly 300,000 fans across 36 huge shows. It’s also been unanimously hailed by critics and fans alike across Australasia.
Kathy McCabe of Sydney’s Daily Telegraph said, ‘Cold Chisel restore your musical soul on their Light The Nitro tour and reaffirm the power of music to not only define a culture but unify a nation’s identity.’ Cameron Adams of Melbourne’s Herald Sun agreed: ‘Cold Chisel remind you of the life-affirming power of a truly great live band. Last night, Rod Laver Arena was wall-to-wall smiling faces, beaming with sheer joy.’ Meanwhile, Graham Reid of the New Zealand Herald wrote ‘Cold Chisel make raucous bar-room rock’n’roll translate into an arena with thrilling emotional impact.’
In addition to performing classics like ‘Forever Now’, ‘Khe Sanh’ and ‘When The War Is Over’, this special Bluesfest appearance will also see Cold Chisel premiere new songs from their forthcoming album. The as yet untitled collection of new tunes was recorded over the last 2 years – partly with original drummer Steve Prestwich and partly with new drummer Charley Drayton.
“Most of us have played Bluesfest solo over the years, but it feels great to be playing there for the first time as Cold Chisel and also be the first Australian band to ever headline the whole Festival,” said frontman Jimmy Barnes. “We’ve all had an amazing 2011 and this should be a great way to kick off an even bigger 2012.”
Thursday, 5th of April – Day 1 of Bluesfest is fast becoming a day not to be missed. Other artists so far announced for Thursday include:
My Morning Jacket, Lucinda Williams, John Hiatt & The Combo, Trombone Shorty & Orleans Avenue, Seth Lakeman, Fabulous Thunderbirds, Nick Lowe, Alabama 3 with many more to be released.
This combination of amazing artists makes for one irresistible feast and electric day & night at Bluesfest. Don’t miss out!
For Bluesfest playing schedule visit www.bluesfest.com.au
More major artists for 2012 yet to be announced!
Thursday Single day Early Bird ticket: $119 ONLY – hurry, they will not last!
Season & 3 Day Tickets also available! All tickets are selling fast!
Artists already announced for 2012 include:
Crosby Stills & Nash – ROGER DALTREY performs THE WHO’S TOMMY & more – Earth Wind & Fire – The Pogues – The Specials -John Butler Trio – My Morning Jacket – YES – Buddy Guy – Maceo Parker – Lucinda Williams – G3 feat:Joe Satriani, Steve Vai & Steve Lukather – Brian Setzer’s Rockabilly Riot! – John Hiatt & The Combo – Donovan – Angelique Kidjo – Seasick Steve – Keb Mo – Nick Lowe – Rosie Ledet – Steve Earle – Justin Townes Earle – Yann Tiersen – Bettye Lavette – Great Big Sea – Seth Lakeman – Kenny Wayne Shepherd –– Jonny Lang – Trombone Shorty & Orleans Avenue – Fabulous Thunderbirds – Alabama 3  – Harry Manx
The 23rd BLUESFEST will take place between Thursday 5th of April and Monday 9th of April at its permanent festival home at Tyagarah Tea Tree Farm just outside of Byron Bay.
Tickets are on sale now through www.bluesfest.com.au or by phoning the BLUESFEST office on 02 6685 8310.

BLUESFEST, Australia’s multi-award winning and internationally renowned Festival, has now unveiled its first  and second artist announcement for the 2012 Festival. One look at the star studded array of artists confirms that BLUESFEST 2012 is on track to deliver yet another red-hot Festival.

“Bluesfest continues to deliver the goods” says Peter Noble, Festival Director. “We keep on combing the globe for the best Blues & Roots artists, as well as all the others that mix into our Festival, to yet again bring you the finest artists from around the world. With our 1st announcement we hit hard, presenting some of the best guitarists on the planet and much more. This announcement mixes it up from absolute Legends to some of the most superb Roots artists performing today. I’m starting to get real excited about Bluesfest 2012 – and if you think we gonna stop now – no way – there’s a whole lot more to come!”

This year the Festival leads off with some massive names in Blues, Rock, Country & Progressive Rock, rounded off with some funk magic and guitar wizardry.