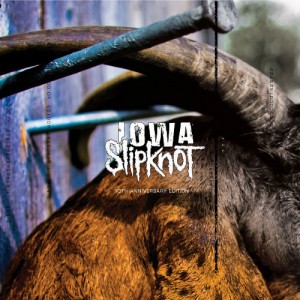 SLIPKNOT TO RELEASE TENTH ANNIVERSARY EDITION OF IOWA ON OCTOBER 28, 2011

DOUBLE CD/DVD SET WILL FEATURE ALL NEW ARTWORK AND MORE

It’s been 10 years since Slipknot unleashed their second album, IOWA, upon the waiting world. Slipknot had impacted the music scene in revolutionary, unpredictable ways and established themselves as a way of life for their fans with their 1999-released, self-titled debut. But IOWA was the album that further proved the band had fully arrived : making music their way, according to their rules and always for their fans, with their middle fingers pointed firmly at the rest of the world.

To celebrate the album’s decade of existence, the band is releasing a special, tenth anniversary edition of this landmark release, which will drop on October 28th, 2011.

The anniversary edition will include plenty of extras for the maggots and beyond to feast upon.

It will be issued as a two-disc, one-DVD digipak with brand new artwork, including photography by #6 – M. Shawn “Clown” Crahan. Disc One will comprise the original IOWA album along with a remix of ‘My Plague’ as an added bonus track. Disc Two will include the full live audio from the legendary Disasterpieces DVD, where the band’s 2002 show at the London Arena was captured by 30 cameras and released as a concert film. The DVD will include Goat, a new film directed by Crahan featuring never-before-seen interviews and footage showing the madness that surrounded the IOWA era, plus four music videos.

The original pressing of IOWA is certified platinum in Australia.

The official track listings are as follows: