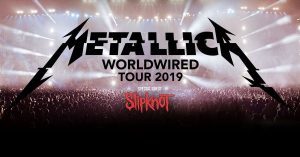 Cementing their reputation as the powerhouse of hard rock, all tickets for METALLICA‘s WorldWired Tour Melbourne show have now sold out.

Due to continued overwhelming demand a 2nd & final Melbourne show has been added, to be played at Marvel Stadium on Thursday, October 24.

Last here in 2013, Metallica’s long-awaited return Down Under will now extend to six Australian stadium shows on their WorldWired Tour, with no further shows possible.

These dates are Metallica’s first ever headline stadium plays in Australia and New Zealand and take theWorldWired Tour past 130 stadium shows played since 2016.

Tickets for the final show go on general public sale at 2pm Tuesday, April 9, with presales starting from Wednesday, April 3 at 1pm.

Remaining tickets for all other dates are on sale now, where still available:

Special guests Slipknot will appear on all dates.

Tickets for this final Melbourne show go on sale to the general public Tuesday April 9 at 2pm.

American Express Card Members are also among the first with access to tickets, with a presale beginning this Friday, April 5 at 1pm. Visit amexinvites.com.au for details.

Tickets for all other shows are on sale now. For further details visit: livenation.com.au.