FRANK IERO Signs With UNFD New Album, ‘Barriers’ TO Be Released On May 31 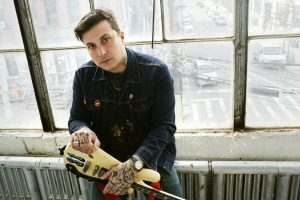 “Super excited to be joining the UNFD family,” said Iero about the signing. “We’ve known each other for a long time and the opportunity to be finally working together with people who really understand the project and believe in it is the greatest thing you could ever ask for.”

Recorded and mixed by Steve Albini, the 14-track album is not only a deeply existential journey, but it is also a triumph for Iero in tackling some of the barriers and obstacles that stood in his creative path. On the creation of Barriers, Iero says, “It got me thinking about how we set up these obstacles around ourselves. Sometimes they’re for protection and sometimes they’re to keep people out, and sometimes we even set them up so that we fail and we find solace in that failure. But whenever I find something that scares the shit out of me, that’s when I know I have to do it! And so these songs are about experiences that were either walls I wanted to break down or walls that I’d built up around myself in order to protect myself. But these songs were also things that I’d never attempted before but had always wanted to try.”

In anticipation of Barriers’ release, the first single, Young and Doomed, will be released to all DSPs onMarch 21.  The dark rock n’ roll anthem will premiere on Thursday, March 21 on BBC Radio 1’s Future Sounds with Annie Mac.

A multi-faceted musician whose credits include solo albums as frnkiero and the cellabration (2014’s Stomachaches) and as Frank Iero and the Patience (2016’s Parachutes), Iero had cut his teeth in post-hardcore stalwarts Leatherface, Pency Prep, industrial duo Death Spells and the platinum-selling My Chemical Romance. “This is who I am. I create in order to survive. And every chance I get I’m going to evolve and change,” he says. “The ambition is to be for these songs to be perceived without any kind of past notion of what the project is supposed to sound like, to break down any and all boundaries and barriers that we’ve set up or that other people have set up for us. We really did go in and create something brand new for ourselves and that’s been such a challenge and fun undertaking.”

Frank Iero and the Future Violents is Evan Nestor, Matt Armstrong, Tucker Rule and Kayleigh Goldsworthy.
Barriers was recorded and mixed by Steve Albini and will be released via UNFD on May 31, 2019.
Share this post on: Share on FacebookShare on Twitter