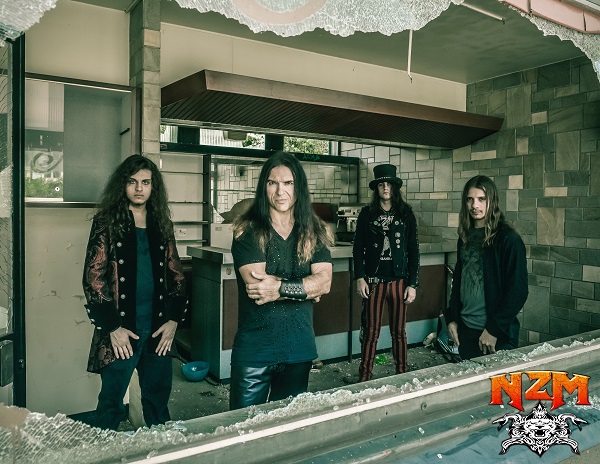 “If you are into heavy metal music that is intense and powerful with a melody that is fueled, you would definitely enjoy the thrilling ride by listening to NZM tracks.”

Let’s start with the basics; for those that aren’t aware of you, can you please give us the abridged version of your story, and how you would best describe your music?
NZM is a high energy Hard Rock/Power Metal band with strong melodic vocals, edgy riffs and fast and furious keyboard lines. NZM is based in South Florida, USA and was formed in 2010 led by Nick Z Marino (keyboardist / singer for Yngwie Malmsteen, Voices of Metal United, keyboardist for Generation Axe and Yamaha endorsed artist). In 2009, Nick Z Marino rejoined Yngwie Malmsteen,as a keyboard player, to perform on a Japan tour co-headlining with Deep Purple. On the way back to the US, Marino played his original demo to Yngwie. Yngwie decided to release Nick Marino ‘s first solo album “Freedom Has No Price”. The record was released in April of 2010 on Malmsteen’s  “Rising Force Records” label. Nick Z Marino formed his own band NZM and continued performing with Yngwie Malmsteen and NZM to present day.

Can you now please introduce each band member including yourself, and give us a rock ‘n’ roll fact or myth about each of you?
Nick Z Marino – lead vocals and keyboards

Fact: Cooper, Moshen and Wilson are all young talented musicians.

In terms of your music and any releases, instead of giving us a standard review, let’s say if you had to give us your best door to door sales pitch to try and convince someone to listen to it before they slam the door in your face, what do you say to them?
If you are into heavy metal music that is intense and  powerful with a melody that is fueled, you would definitely enjoy the thrilling ride by listening to NZM tracks.

With your song writing, what do you consider to be the most important ingredients that make up one of your songs?
Our songs are filled with energy, beautiful melodies, masterful solos and intense speed.

Are there current plans for any future releases you can give us the scoop on?
NZM’s new album “Time’s Running Out” is in the making and it is planned to be released at the end of 2018.

So what bands did you grow up listening to and how did they help create the style of music that can now be heard throughout your music?
Bands such as Deep Purple, AC/DC, Dio, Iron Maiden, Ozzy Osbourne, Yngwie Malmsteen, Symphony X, Edgy, and Masterplan all had a strong influence on NZM’s music.

In terms of touring, here’s your chance to plug any upcoming shows, and for those that haven’t seen you, how would you describe a typical live show of yours?
NZM has an upcoming tour in Mexico and Central America in October 2018. Our show is intense with high vocals, masterful solos and metal madness.

For a bit of fun, say you get the chance to open for any artist or band in the world, who would they be and why?
We would love opening for AC/DC. We are all huge fans.

If you were to cover one song that no one would expect that you’d cover what would it be and why?
NZM covered one unexpected song. We made a metal version of “Get Down Tonight” (KC and The Sunshine Band). It was quite challenging to make a metal remake of a disco anthem.

Lastly, here’s a chance to grab a magic lamp and from it you are granted three wishes.  They are:
1. To play in front of 1/2 million or more fans
2. For our albums to go platinum
3. To play and make a video in space

Freedom Has No Price, by Nick Marino for Yngwie Malmsteen’s Rising Force Records in April 2010. – Discogs