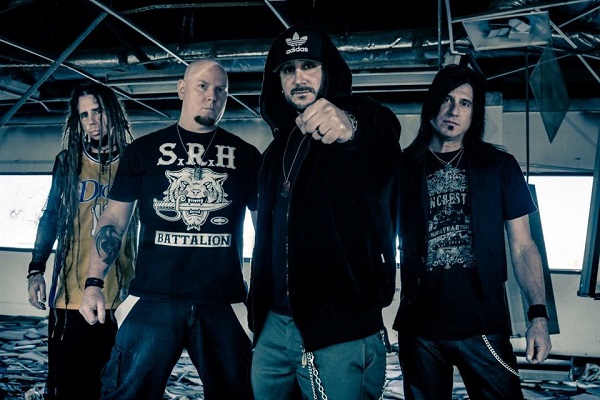 “The most important ingredient is the vast array of musical influences each member of the band possesses and the openness to pretty much try anything musically to make the song better.  It allows us to not be boxed in by one certain style and to create music that is very unique and diverse.”

From Bio: KillSET was created by taking a professional, well-oiled metal machine and adding an explosive, highly ignited, and charismatic front man. With an anything goes attitude, the contributions and writing styles of each member seem to perfectly complement one another’s individual uniqueness, to create a sound that beautifully kills. KillSET joined forces with renowned producer, Eddie Wohl (Fuel, Smile Empty Soul, Anthrax, Ill Nino) and completed their debut full-length album “Know Your Killer”, demonstrating their signature sound of pure ferocity and simple beauty. The overwhelming support of the freshman album lead KillSET to embark on another musical journey, again collaborating with producer Eddie Wohl, which has culminated in a sophomore effort that will undoubtedly impact anyone who dares to listen. With the ability to transcend the current generic norm, the new album S.T.F.U. has a diversity and flavor that is simply undeniable.

We teamed up with ReverbNation to share some talent with the world, first cab off the rank is KillSET from Los Angeles, we dug their sound and found them very worthy of being one of our Best Things You’ve Never Heard! Check them out!

Let’s start with the basics; for those that aren’t aware of you, can you please give us the abridged version of your story, and how you would best describe your music?
KillSET is the integration of a professional, well-oiled, finely tuned metal machine and an explosive, supercharged, charismatic front man.  The band was created when former ARCM members, James “Jas” Dillon (Drums), Mark Baker (Bass), and Dave Comer (Guitars), combined forces with established singer Luca. The contributions and writing styles of each member perfectly complement one another’s individual strengths to create a sound that beautifully kills.

Can you now please introduce each band member including yourself?
The band is comprised of Mark Baker (Bass), Dave Comer (Guitars), James “Jas” Dillon (Drums), and myself Luca the singer.

In terms of your music and any releases, instead of giving us a standard review, let’s say if you had to give us your best door to door sales pitch to try and convince someone to listen to it before they slam the door in your face, what do you say to them?
Our new album S.T.F.U. will kick you in the balls and whisper softly in your ear simultaneously.

With your song writing, what do you consider to be the most important ingredients that make up one of your songs?
The most important ingredient is the vast array of musical influences each member of the band possesses and the openness to pretty much try anything musically to make the song better.  It allows us to not be boxed in by one certain style and to create music that is very unique and diverse.

Are there current plans for any future releases you can give us the scoop on?
We actually just finished recording two new singles with our good friend and producer, Eddie Wohl (Anthrax, Fuel, Smile Empty Soul, ill Nino).  We will be having a guest vocalist on one of them.  We cannot reveal who that is yet, but it will be a pretty big deal!

So what bands did you grow up listening to and how did they help create the style of music that can now be heard throughout your music?
We all grew up listening to different stuff.  There is a common thread of bands that connect us all in one way or another, but the difference in our influences is what I believe really makes our stuff different and stand out. Personally, I love bands like Rage Against The Machine, Nonpoint and Sevendust.

In terms of touring, here’s your chance to plug any upcoming shows, and for those that haven’t seen you, how would you describe a typical live show of yours?
We recently got back from a small run out to perform at Rocklahoma!  That was an incredible experience.  We are currently looking for a fall tour and hope to have something locked up soon.  I think our name KillSET pretty much describes our performance.  We “Kill” the “SET”.  It’s a fun, engaging, high energy show! We have an understanding as a band that if each and every one of us does not come off the stage drenched in sweat and about to pass out, then we did not do our job that night.

For a bit of fun, say you get the chance to open for any artist or band in the world, who would they be and why?
For me personally, it would be Rage Against The Machine, if they ever got back together.  They were the first band that I saw live that made me want to pursue music.  I remember being blown away and saying to myself…that is what I’m going to do in this life!

If you were to cover one song that no one would expect that you’d cover what would it be and why?
We actually already did.  We covered “Jump” by Kris Kross!  The cover/parody music video is now available to check out on Youtube. The response to it has been incredible!  It was the most fun I’ve had shooting a music video, by far. We got all the 90’s clothes, put them on backwards, with beepers and whatnot and just had a blast making it.