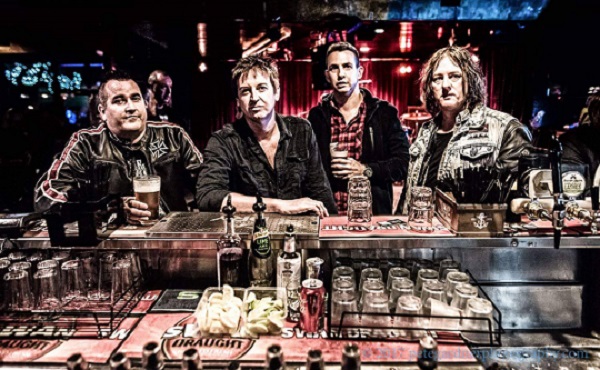 “We all generally know if it’s going to work or not after running through it so we either move forward with an idea or put it in the basket for later.”

Sister Switchblade is a rock band out of Perth, Australia. Their latest release ‘Best Served Cold’ is as described by singer, Andy “Aussie rock groove meets 80’s sunset strip flair meets 70’s punk rock”. With a new album in the works, you’ll hopefully be hearing more from Sister Switchblade in the near future.

We dig the sound of Sister Switchblade, and happily proclaim them one of our best things you’ve never heard. Check them out!

Let’s start with the basics; for those that aren’t aware of you, can you please give us the abridged version of the Sister Switchblade story, and how you would best describe the music of the band?
Andy: My previous band split up just before we were to commence pre-production for our third album. I had written well over an albums worth of material so even though I was not quite ready to jump straight back into another band, I started going into the studio once or twice a week and slowly putting down the basic tracks. I invited some muso friends to play on certain songs and after about 12 months I had an album. I asked Dylan, Browny and Adam if they’d be interested in a one off gig to launch it and the rest is history.

Can you now please introduce each band member including yourself, and give us a rock ‘n’ roll fact or myth about each of you?
Andy: I’m the lead singer and rhythm guitarist. I’ve been in several rock bands over the years so there’s a lot of stories and myths I could tell you but I’m gonna plead the 5th.

Browny (Bass) and Dylan (lead guitar) both also play in my favourite ‘other’ local band ‘In The Now’.

Adam makes a living playing drums and carrying a gun.

You have recently released your debut album ‘Best Served Cold’, so instead of giving us a standard review, let’s say if you had to give us your best door to door sales pitch to try and convince someone to listen to it before they slam the door in your face, what do you say to them?
Andy: Aussie rock groove meets 80’s sunset strip flair meets 70’s punk rock.

When releasing a debut album how hard is it putting together just what you want to introduce yourself to the world with?
Andy: I had a lot more freedom with BSC and wanted to show a little diversity with this album. I made a conscious decision to add a couple of songs that would not have been included on an album by my previous band. Overall the album has been well received from rock magazines and online sites around the world however many have made comments that they would’ve preferred a straight-out rock album. I still stand by the slower songs but for the new album there will be no ballads.

In terms of your song writing, what do you consider to be the most important ingredients that make up one of your songs?
Andy: Big riffs, hooky melodies and shit loads of energy and attitude.

Adam: Chemistry and the willingness to try out different ideas the boys put forward and see where it goes. We all generally know if it’s going to work or not after running through it so we either move forward with an idea or put it in the basket for later.

So what bands did you grow up listening to and how did they help create the style of music that can now be heard throughout your music?
Adam: Personally, I grew up with the classics as in ACDC, GnR, Motley, Maiden, Sabbath, Deep Purple and a lot of Aussie rock as in The Angels, The Poor, Rose Tattoo and throw in some blues. Mum always had music playing growing up with The Stones, The Cars, Eagles, Dire Straits and my rock came from my Dads collection of mainly British rock/metal bands.

In terms of touring, here’s your chance to plug any upcoming shows, and also for those that haven’t seen you, how would you describe a typical Sister Switchblade live show?
Andy: Right now we are in full writing/pre-production mode for the new album. We’ve been considering some mini-festival shows before the end of summer and I would say we will do at least one to try out the new material. A typical live Sister Switchblade gig is pretty much no-frills rock. Just a loose, fun, high energy show. No real bells and whistles, just 4 experienced rockers going hard.

For a bit of fun, say you get the chance to open for any artist or band in the world, who would they be and why?
Adam: Motorhead

If you were to cover one song that no one would expect that you’d cover what would it be and why?
Andy: We are toying with an idea right now to include on the new album. The song is by a band that wouldn’t be such a surprise but the actual song and our interpretation of it is really different. But you’ll have to get the new album to find out what it is.

Lastly, with 2018 now well under way, here’s a chance to gaze into your crystal ball and see the future.  So, by the end of 2018, Sister Switchblade will:
1. Have a new album out.
2. Have first overseas shows confirmed (we’re in talks at the moment)
3. Add more sequins to our stage gear.