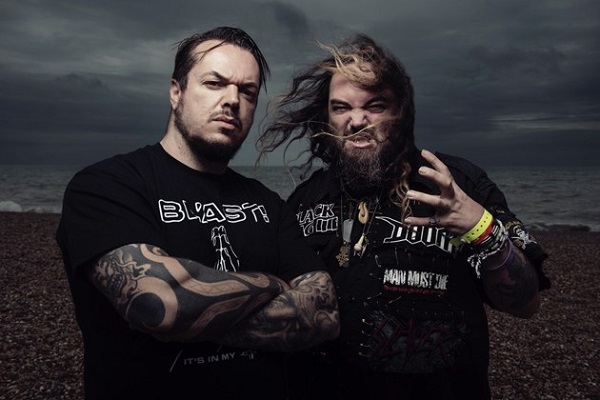 I do love an album celebration tour, this one though is a little different as Max and Iggor Cavalera return to Australia and to their ‘Roots’ for a special night where they’ll play the classic Sepultura album ‘Roots’ in full. This is going to be insane!

Skindred make their way to the stage to the Imperial March and we’re ‘Under Attack’, now in seeing Skindred before at Soundwave I know how good they are but this sound is so good for a four piece and as Benji yells “are you ready for some rock and fuckin roll?!” we most definitely are and this is truly an impressive band. The almost reggae vibe mixed with the rock is what they do and they do it well. With early singalongs and a heavy sound these guys are killing it and I have to say so worthy of a headline slot but seeing a support band this good is outstanding. ‘Sound the Siren’ sums this band up with such a killer arrangement and sound, fucking hell this band is good. Off to the merch booth I go for a shirt. But when they play ‘Pressure’ and the place starts bouncing they’ve got them and it just gets better with a little bit of ‘Back in Black’ for good measure. Well done Skindred and even better with ‘Machine’ wow what a track. Benji is hilarious as he is constantly yelling at the crowd and never skipping a beat, this is so good. Watching the crowd fill up while they’re on is pretty cool as they win many a person over. ‘Nobody gets out alive’ rocks, then a little bit of ‘Iron Man’ intros some amazing musicianship and as they close their set with ‘Warning’. They have wound the crowd up perfectly for what’s to come.  I feel like if Rage Against The Machine and Korn had a kid it would be called Skindred and that kid would want to be heard, and tonight it was.

Here we go!! Max and Iggor Cavalera walk on to the stage with band and they open with the album opener and pretty much what would be the biggest song of the night. It’s ‘Roots Bloody Roots’ and where do you go from here?! It’s just so heavy, so good and twenty years in the making. Max takes to the front of the stage asking if we can take it before blasting into ‘Attitude’ as the floor goes crazy and rightfully so. Damn this is heavy and for me the first time hearing Max and Iggor play this and these songs is fucking killer. Straight into ‘Cut Throat’ which got the crowd moving it’s the opening to ‘Ratamahatta’ that blows this place up and continues to as this album just gets better as it goes along. ‘Breed Apart’ sees the mosh open up and this just proves how much this is loved and wow the place is going nuts. ‘Straighthate’ and that driving bass that brings it in, wow, then watching Iggor pound the skins is actually a pleasure to watch this is how these songs are supposed to sound and holy shit it’s good. We’re only six songs in and this is amazing, and “in this world what goes around comes around” and as the circle pit opens this is spectacular to watch from above. ‘Spit’ opens the pit up even more if that was even possible and the frantic beast just shows everyone how it’s done. Straight into ‘Lookaway’ and again the drums, wow, but the heaviness this hits from the opening note, outstanding. This fuckin rules and before the applause could even die down Max and Iggor remain on stage and trade off heaviness to lead in to ‘Dusted’ with some more ‘Iron Man’ second time tonight but much better received now. Jesus this is heavy, I love this music so much.

‘Born Stubborn’ sees two circle pits meet and fists thrust back at the stage with a note perfect performance. Wow. Iggor takes over with an unbelievable drum solo with ‘Itsari’ and man that guy can play, such a killer sound. Back to the extreme with ‘Ambush’ and it just sounds so good and short and sharp before a drum takes centre stage and a reminder of when we go down we go down fighting and some amazing tribal beats and special appearance by Dave from Machine Head on the drums too was killer. But when the band come back for ‘Endangered Species’ it’s on and as we get ready to destroy this fucking place ‘Dictatorshit’ begins and goes crazy. The floor looks like a washing machine and it’s amazing. And with that ends the album. Wow.

The band leave the stage only to return with just Max and Iggor and an unbelievable medley of Beneath the Remains / Desperate Cry / Orgasmatron / Polícia and just hearing these two make music this heavy is actually astounding. It’s a treat and they can just keep going for all I care. This is great.  They give us some Venom with ‘Black Metal’ and then some fuckin’ Motörhead with ‘Ace of Spades’ and if there’s one song tonight that truly opened the pit up it’s this one.  The set closes with a reprise of ‘Roots Bloody Roots’ to end the night as it started. Sheer and utter brutally.