An Acoustic Evening With GAVIN DEGRAW 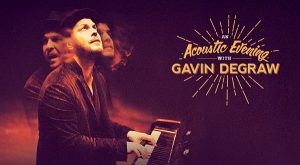 Following a multi-city trek across Europe, Gavin DeGraw heads to Brisbane, Sydney and Melbourne for club shows this July to perform songs spanning his entire career.

The intimate set will give fans the chance to see McGraw perform unplugged and stripped down configurations of some of his biggest hits as well as rare album cuts, some of which he’s never performed live.

The tour will continue to support DeGraw’s fifth album Something Worth Saving which was released last September through RCA Records and includes singles ‘Making Love with the Radio On’ and ‘She Sets The City On Fire’.

Tickets for An Acoustic Evening with Gavin DeGraw go on sale at 3pm Monday, May 1.

Gavin DeGraw first broke through with his 2003 debut album, Chariot, which sold in excess of one million copies, earned US platinum certification and yielded three hit singles: ‘I Don’t Want To Be’, ‘Follow Through’ and the title-track, ‘Chariot’.

2008 delivered DeGraw’s self-titled second album which debuted at #1 on the US digital sales chart and #7 on Billboard’s Top 200, spawning hit singles ‘We Belong Together’ and ‘In Love With A Girl’ which Billboard dubbed “a rocking homerun”.

Two years following the release of live selections on Free in 2009, DeGraw released his third studio album, Sweeter and produced the #1 Hot AC hit, ‘Not Over You’, co-written with OneRepublic’s Ryan Tedder. 2013’s Make A Move garnered rave reviews and included the hit song ‘Best I Ever Had’.

McGraw was nominated for his first Grammy for ‘We Both Know’, the song he co-wrote with Colbie Calliat for the 2013 film, Safe Haven.  Since then he has been consistently touring around the world, including sold out dates with the legendary Billy Joel and hit a milestone with the release of his first greatest hits compilation Finest Hour in 2014.

TICKETS ON SALE
3PM MONDAY MAY 1