Today, Jon Stevens announces his new album Starlight, and releases a brand-new single titled ‘Hold On’. On Starlight, Jon Stevens joins forces with legendary musician, songwriter and producer Dave Stewart of Eurythmics, who co-wrote and produced the album. Ringo Starr plays drums on the lonely ballad ‘One Way Street’ and ‘Something Bout You’ features the vocals of Vanessa Amorosi.

Different as they are, each track on Starlight overflows with feeling, candour, and an exuberance that comes from being plugged into life. Everything Stevens has survived, learned from, mastered and made leads to this album.

Jon Stevens is recognised as one of the most talented rock musicians to emerge from Australia in recent memory. He has had phenomenal success as a solo artist in Australia and New Zealand and as the lead singer/songwriter of major rock acts Noiseworks, INXS (after the death of his friend Michael Hutchence), and was the original creator of The Dead Daisies.

Stevens stands apart in the music scene, with a raw vocal power that won him attention first as a teenager and now as a veteran singer and songwriter. Time has toughened his delivery while tapping into his emotional wellsprings more than ever before.

Jon Stevens’ career has gone from strength-to-strength: a record-smashing debut at age 16 with two consecutive No. 1 singles in his New Zealand homeland, huge hits in Australia as lead singer with Noiseworks, a 21st-century liftoff to worldwide acclaim at centre stage with INXS, and the continuing success when Jon co-wrote  ‘Lock n’ Load’ with  legendary Slash.  Jon produced the track in Australia for The Dead Daisies.

‘Hold On’ is the first taste of Starlight, a raw and powerful track that captures the spirit of overcoming hardship and struggle. Directed by Jesse Davey, the video clip for ‘Hold On’ was shot in just one day in the Mojave Desert, USA.

Starlight is an album created with a lifetime of talent and experience behind it – backed with the talent of some of the best musicians in the world. The result is a highlight in what continues to be a remarkable career for Stevens and will undoubtedly take his music onto an international platform that is so well deserved. 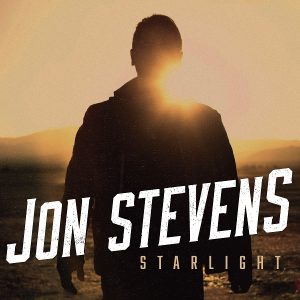 Hold On
Oh Lord
Feel Like Letting Go
Scars
F.U.C.
Devil In My Heart
Something Bout You (feat. Vanessa Amorosi)
One Way Street
What Makes You Happy
Starlight
All About The People