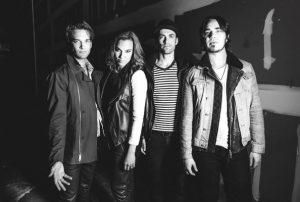 Halestorm, the Grammy-Award winning rock outfit from Red Lion, Pennsylvania in the USA are today announcing their Australian East Coast tour dates for January 2017 – and they are bringing their good friends Devilskin from New Zealand along for the party. MJR Presents are bringing out the four-piece fronted by Lzzy Hale for their second run of shows in Australia on the back of their 2014 release “Into the Wild Life”.

The band were last here in 2015 and wowed audiences everywhere with their epic live show.

Frontwoman Lzzy Hale is still pumped about their album and has been touring it almost non-stop around the globe since its release. “On the last record, we hit all these crazy milestones,” Hale says. “All of a sudden the world was aware of us so we celebrated unabashedly.”

Indeed, “Freak Like Me” and “Love Bites (So Do I)” both reached #1 on Active Rock charts in the US, making Halestorm the first ever female-fronted band to top the format’s airplay ranking.

In addition, the band won a Grammy for Best Hard Rock/Metal Performance for “Love Bites (So Do I).” The accomplishments didn’t stop there. Hale collaborated with “America’s Got Talent” star Lindsey Stirling on the EDM song “Shatter Me” and performed with country maverick Eric Church at the CMT Awards, demonstrating her versatile vocals mix with any genre. On top of that, Hale was honored by Gibson Guitars, which celebrated her accomplishments by creating a Lzzy Hale signature Explorer guitar.

“All of the attention was amazing and fueled our confidence,” Hale says. “So we decided to throw everything we were used to out the window and just go for it.”

It’s that “Just go for it” attitude that brings Halestorm back to Australia – “We came down under for the first time in 2015 and we had the best time ever. This time is shorter, but bigger rooms and we can’t wait to party again with all our friends in Australia. It’s gonna be so good.” 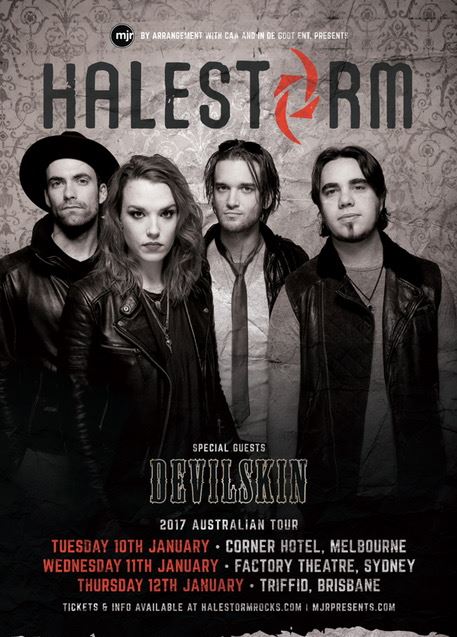 Pre-sale tickets go on sale at 9am Wednesday 12th October and general public tickets will be available from 9am on Friday 14th October at www.mjrpresents.com