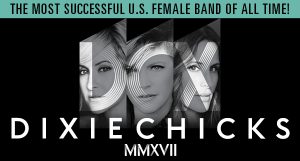 Global superstars the DIXIE CHICKS today reveal that they will return to Australia in March, to play national all ages headline shows for the first time in over ten years.

The captivating trio will make a triumphant return to Australian arenas with their MMXVII WORLD TOUR, set to kick off at Sydney’s Qudos Bank Arena on Wednesday 29th Marchbefore heading to Melbourne’s Rod Laver Arena on Saturday 1st April and wrapping up at the Perth Arena on Wednesday 5th April. Tickets will go on sale on Wednesday 26th October at 11am local time.

In a huge coup, the annual CMC Rocks QLD Festival has already announced Dixie Chicks as headliners for the 10th Anniversary event in 2017. The festival, which this year sold out for the first time in its nine-year history and is set to do the same in 2017, runs from Friday 24th to Sunday 26th March at Ipswich’s Willowbank.

Dixie Chicks have no less than thirteen GRAMMY Awards, six Billboard Music Awards, four American Music Awards and countless Country Music Association Awards under their belt. They are a multi-platinum selling act across North America, Europe and Australia, and one of only a handful of acts to ever achieve ‘diamond’ status; reaching the stratospheric landmark of over 10 million copies sold, with both ‘Wide Open Spaces’ (1998) and ‘Fly’ (1999). With well over 30 million albums sold worldwide to date, the Dixie Chicks are the biggest US female band of all time.

Since 1990, the trio has released seven studio albums, three live albums and a string of live DVD’s. They have shared the stage with Bruce Springsteen, The Eagles, Tim McGraw and Pearl Jam among many others.

Their on-stage reputation has helped the Dixie Chicks play to hundreds of thousands of fans at some of the world’s most prestigious venues, from London’s O2 Arena to the Hollywood Bowl, LA’s Staples Center to New York’s Madison Square Garden, and outspoken songs like‘Goodbye, Earl’ and ‘Not Ready To Make Nice‘ make it clear that this power trio plays by nobody’s rules. Superstars, renegades, innovators, heroes and villains – For almost two decades, Dixie Chicks have developed from a band into a phenomenon.

The trio has just wrapped up a mammoth European and North American headline tour, setting stages alight in every city, with epic reviews rolling in including the UK Telegraph who wrote,“… the triumphant trio proved the power lies in their musicianship, not notoriety, and their talents remain as rich and fierce as ever.” Rolling Stone described the Dixie Chicks’ recent New York show as “thrilling” and The Boot noted, “They are equally fearless and almost absurdly talented as musicians…”.

One of the most prolific and enthralling live acts on the planet, Dixie Chicks’ return to Australia in 2017 is sure to be one of the most talked about live experiences for years to come. Don’t miss your chance to be there.