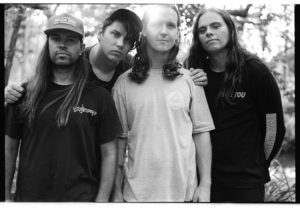 The year 2016 has proven to be a massive year for four mates from Mansfield. Following the release of Violent Soho’s #1 debuting album WACO and a completely sold out tour to follow (which included a whopping two Enmore Theatres, three Tivolis and three Forum Theatres), Violent Soho are showing no signs of slowing down! Today, we are beyond excited to announce that the band are heading out on their biggest tour to date, with another line up for the ages! Joining them will be special guests The Bronx (USA), Luca Brasi and Tired Lion.

Having formed over 11 years ago, it’s fair to say that Violent Soho have slogged their way past every inch to get where they are today. A history that includes being signed to Thurston Moore’s (of Sonic Youth) label, moving to the US for two years and touring with their heroes such as Alice in Chains, Dinosaur Jr and Built To Spill and eventually moving back to Australia because things hadn’t really panned out. Then in 2013 Violent Soho, seemingly out of nowhere, propelled themselves into the hearts and stereos of many around the world with wildly well-received LP; ARIA Gold accredited Hungry Ghost.

In November 2015, “Soho” smashed back on to our airwaves with ‘Like Soda’ (#15 in triple j Hottest 100) the first single from their fourth full length ARIA #1 album WACO, which they recorded at The Shed Recording Studios in Brisbane with producer and friend Bryce Moorhead, and released in March 2016 via I Oh You. Since then, fans have been lapping up the record, collectively losing their minds over subsequent singles ‘Viceroy’, ‘So Sentimental’ and current head banger ‘Blanket’.

This national tour will see Violent Soho jump onto some very prestigious stages – in their biggest rooms to date – and will bring with them one of the most frenzied line ups of the year!

“We are truly honoured to have The Bronx on board for these shows. There is no band in the world that can put on such a high energy performance the way that these guys do. As a band, we have always looked up to them a hell of a lot. Our friendship goes back over 10 years so to have our big Bros from the USA come all the way across the Pacific to play with us again means the world. Luca Brasi can also be held in the same esteem. For us, they are probably Australia’s best punk rock band by a long shot. And to have this line up complimented by such a class act as Tired Lion just puts the icing on the cake for what is going to be one epic fucking tour. Really, we are just so stoked!” – Violent Soho

Taking the reins of main support are Los Angeles heavyweights The Bronx, who for the better part of a decade, have played provocateurs. From their beginnings as an attack-mode hardcore band to their hardscrabble lives as road warriors to the twist of fate that led to their alter ego Mariachi El Bronx — an episode that itself was an act of defiance — the Los Angeles quintet has embraced a fierce independence.

“Violent Soho and The Bronx go together like cocaine and waffles. We are beyond stoked to be playing with the boys again. These shows are gonna be legendary.” – The Bronx

This already hectic lineup is reinforced with Tasmania’s hardest working and most endearing melodic punks Luca Brasi, who stepped up their game with third LP If This Is All We’re Going To Be debuting at #18 on the ARIAs and topping the AIR charts. And Perth firecrackers Tired Lion, who seized Australian rock fans by the scruff of their necks in 2015 – winning triple j’s prestigious Unearthed Award, and dominated the airwaves off the back of killer single ‘Suck’.

Violent Soho and The Bronx in itself would be an insane show. Throw in two of the Australian punk scene’s fiercest outfits in the form of Luca Brasi and Tired Lion, and you have yourself one hell of a party! Trust us – this is going to be epic!

Presented by Unified, Village Sounds & I OH YOU