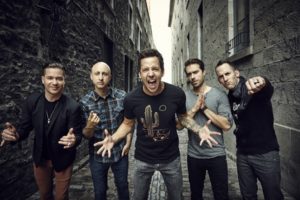 Frontier Touring is thrilled to confirm three East Coast shows for Canadian pop punk legends Simple Plan this September. Returning to Australian shores for the first time since 2013, the band is extremely excited to be bringing their live show to fans in Sydney, Brisbane and Melbourne. Joining Simple Plan at each of the shows will be Sydney pop rockers Forever Ends Here.

2016 has seen Simple Plan’s triumphant return with the release of their critically-acclaimed album Taking One For The Team (out now through Warner Music). The album debuted in the Top 20 in five countries across the globe including Australia, and its singles ‘Singing In The Rain’,‘Boom!’ and ‘I Don’t Wanna Go To Bed’ (ft. Nelly) have each gathered more than 2 million YouTube views.

‘If you want a rocking and rolling feel-good album to kick off 2016 with, then this one is for you’ – The AU Review

‘There’s no pretence here: this album is pure, no-frills, feel-good fun, a start-to-finish crowd-pleaser for fans of that classic pop-punk sound’ – All Music

‘Pioneers of the pop punk scene’ – Renowned For Sound

Since the release of their second album Still Not Getting Any… in 2004, Simple Plan have become pop punk household names around the globe. Featuring iconic anthems like ‘Welcome To My Life’ and ‘Shut Up’, Still Not Getting Any… boasts a double platinum certification in Australia and has sold over a million copies in the United States.

In 2011, Simple Plan released the video for their track ‘Summer Paradise (Australia)’, an ode to Australia in the summertime and lead singer Pierre’s love of surfing. Its epic accompanying video filled with candid footage of the band on tour can be viewed here.

Known for their dynamic and entertaining live performances, Simple Plan have a high energy stage presence that fans go wild for from the very first guitar lick. Watch them perform hit after hit at their 2012 show at Melbourne’s Festival Hallhere. Pierre’s legendary stage swagger and highly skilled band members combined with their love and affinity for Australia is a recipe for a memorable evening.

‘The band is better than ever’ – The Upcoming

Giving back and helping out young people in need has always been paramount for Simple Plan and that’s why they launched the Simple Plan Foundation in 2006. Since its inception, the Foundation has donated more than 1.7M$ to charitable organisations around the world and has received many prestigious awards, including the Allan Waters Humanitarian Juno award. The band continues its philanthropic initiatives to this day and 1$ of every ticket sold on their current Taking One For The Team World Tour, including the just announced Australian dates, will benefit the Simple Plan Foundation.

Opening all shows is fresh faced Sydney based 4-pieceForever Ends Here. With their musical roots firmly planted in punk rock and pop, their diverse sound makes them the perfect support act for Simple Plan. Since the release of their debut EP Where I’d Rather Be, the boys have been playing shows across Australia and are considered at the forefront of the local pop-punk scene in Sydney.

Now on the eve of releasing their debut album Imagine This(out independently on August 29), the band will take to the stage to perform their latest offerings ‘Search The Night’and ‘Chapters’. Earlier this year, the band performed a stripped back version of Troye Sivan’s ‘Youth’. On the track, lead singer Luke McChesney’s vocals sore while the rest of the band’s skilful musicianship shines through, showcasing the band’s acoustic versatility.

September 2016: put it in your diaries and make sure you don’t miss out on securing your tickets. Simple Plan is a one of a kind band that bring their A-game every time they visit Australia – this time is sure to be no different.

General public on sale from Wed 20 Jul
10am local time