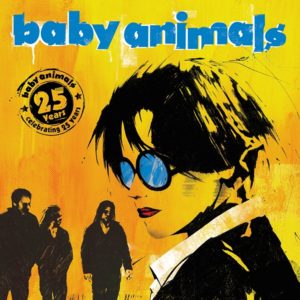 They came blazing out of the radio with the aptly titled ‘Early Warning’. “Too young to know,” Suze DeMarchi sang. “Too old to listen.”

Was it really 25 years ago?

Baby Animals were everywhere in 1991. Twenty-five years later, their self-titled debut album remains one of the greatest Australian debuts of all time and one of the great rock records.

The 25th Anniversary Deluxe Edition features the original classic album, as well as showing Baby Animals in their natural habitat – live on stage, with a concert recorded in Boston when the band was on tour with Van Halen in 1992.

Baby Animals was released in September 1991, the same month as Nirvana’s Nevermind. Baby Animals sold 600,000 copies in Australia, keeping Nevermind (which sold 350,000) out of top spot on the Australian charts.

Baby Animals were on the road with Van Halen in America when they discovered the album had topped the Australian charts. “We were backstage, just about to go on, and our manager came up and told us we’d gone to number one in Australia,” Suze recalls. “It was an amazing moment.”

The album spent six weeks at number one.

Baby Animals was recorded at Bearsville Studios in Woodstock in America, engineered by Kevin ‘Caveman’ Shirley and produced by the legendary Mike Chapman, an Australian who found fame internationally, working with Suzi Quatro, Blondie, The Knack and The Sweet. “When we found out he wrote ‘Ballroom Blitz’, we were sold,” Dave Leslie said. “We knew he was the guy.”

Five singles were released from the album: ‘Early Warning’, ‘Rush You’, ‘Painless’, ‘One Word’ and ‘Ain’t Gonna Get’.

But the band had little time to celebrate their success. They couldn’t even go to the ARIA Awards – they were on the road with Van Halen at the time. “All I really remember is going from country to country and gig to gig,” Suze smiles.

Suze laughs when asked what she remembers of the Van Halen tour. “I can’t repeat many of the stories. There was a lot of craziness on that tour.”

Baby Animals is featured in the book The 100 Best Australian Albums, with the entry stating: “Baby Animals exploded on the Australian music scene with a bracing fusion of heavy metal bravura, a touch of glam dynamics and a look and a swagger … it was all perfectly captured in a great debut album … a crunching melange of primal rhythms, spitfire guitars and vocal sass.”

The band’s manager at the time, John Woodruff, later said his biggest regret was that Baby Animals didn’t become global stars. “They were just so close on that first album,” John said. “Suze was the biggest star out of everyone I ever had.” High praise, indeed, considering that Woody also guided the careers of Savage Garden, The Angels and Diesel.

But Suze has no regrets. “We achieved some great things,” she says. “And we’ve still got more to do.”