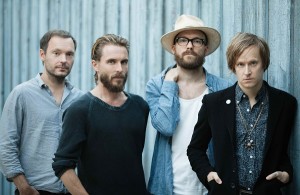 REFUSED wasn’t just ruminating about the lasting impact of popular culture when it began its 1998 album ‘The Shape Of Punk To Come’ with a lyric about classics never going out of style — it was also taking stock of its own turbulent existence, which met an ignominious end later that year in front of 50 kids at a basement show in a Virginia college town. In the ensuing years, the band cast a giant shadow over the world of underground rock, with the boundary-exploding “Shape” rising to all-time legendary status as it influenced a new generation of musical revolutionaries.

If “Shape” blasted apart the constraints of the punk and hardcore worlds with which REFUSED had long been associated, their new album ‘Freedom’ goes a step further by creating a “Thrilling, challenging, life-affirming rollercoaster of a record.” Kerrang!