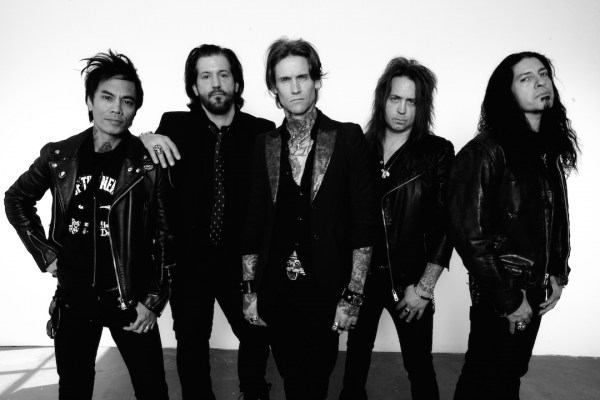 From release: Los Angeles’ notorious, multi-platinum-selling rock band, BUCKCHERRY will release their 7th studio album, Rock ‘n’ Roll, on August 21st via F-Bomb Records/Caroline Australia. Lead single “Bring It On Back” is an immediate reminder that rock ‘n’ roll is alive and thriving in 2015. Buckcherry have added fuel to the genre’s fire for nearly two decades now. The Grammy Award-nominated outfit is responsible for smashes including ”Lit Up” off their gold-certified 1999 self-titled debut as well as ”Crazy Bitch” and ”Sorry” from 2006’s platinum 15. Along the way, they’ve shared stages with everybody from AC/DC and Mötley Crüe to Slipknot and Rob Zombie, among others.

Keith gave us a call to wish us a good morning and to talk about the band’s new album ‘Rock ‘n’ Roll’, making it, producing it, as well as the band’s history, touring Australia, the status of Rock music and much more…

You guys made this album through a pledge music campaign which you’ve used previously, what is that process like for you guys?
Well the pledge thing was just really an excuse because we were fuckin’ around with some cover songs in my recording studio, and we really were having some fun with and we thought it would be a good idea to see if our fans dug it too, so it wasn’t a huge financial commitment for us and we just decided to share some of that music with our fans and we got a really phenomenal response to it, so we’re gonna do another one for sure.

When you’re somewhat making an album for the fans, is there a different thought process in terms of song writing and recording?
I mean look, we’re not going to record anything unless we believe in it and are enjoying it, so that’s first and foremost. It wasn’t some fuckin’ ploy to convince people to fund the record, it was really just we were in between record deals, we were about to start our own record label and we just wanted to have some fun and it was the quickest and easiest way to do it. You know, cut out the middle man, take it directly to the fans and give them a little peak inside some of our favourite music.

You also took up producer duties again on the record, what was it like this time around?
It wasn’t too much different to the last couple of records you know, I’m very fortunate that the band trust me to produce the records and it’s weird, when I’m producing the record I have to consciously get outside of being a guy in the band and really step back and listen with a different kind of ear than if I was in the band. I love it, I love to do the work and I hope to keep doing it in the future.

We last spoke to you pretty much five years ago, at that time ‘All Night Long’ was just released and you coined it your best yet, how have the last 5 years been for the band?
It’s been a whirlwind, man. On the inside of the band just personally with the guys and what’s gone down business wise for us and creatively the ‘Confessions’ record and the ‘Fuck EP’ and now this record it’s really been a whirlwind but it’s good work, we’re always busy, we’re always on the road taking our music to the people, so it’s very, very exciting man, it’s like it never stops. Thankfully we love what we do so it’s not really work at all, is it? It’s the best job going.

Touring wise, have to ask, when do you think we might see you back in Australia?
Well… as soon as humanly fucking possible, Troy… the last time we were in Australia was with Steel Panther for an extensive tour, and it was so much fun, man, we all really appreciated how much the Australian audiences really embraced us and it feels so good to be over there playing our music, so hopefully on this record we’ll get back over there. I guess I wouldn’t be talking to you about our record if we weren’t planning on coming back there, you know what I mean?

Can we maybe expect a live DVD anytime soon?
We’ve been threatening to do a live DVD for a long time, and we do talk about it a lot, so I think in the next year once get on the road for the ‘Rock and Roll’ record and we’re gonna be celebrating the ten year anniversary of the ‘15’ record, and then 2016 is going to be a really big year for us so you might see something come out of that.

Seven albums in, and twenty years in the business, what is it that you still enjoy about being part of Buckcherry?
Writing the songs, making the records, and being on tour… it’s a crazy life but man, it’s really, really good.

I also particularly enjoyed the ‘Fuck’ EP, and when I reviewed it I counted, the word Fuck was used 129 times, well done, what’s your favourite use of the F word?
Thank you. My favourite use of the F word *pauses* gee that’s a tough one man, probably ‘Fuck You’ how about that? I should mention that the Fuck EP has what did you say, 129 Fuck’s on the record? But not one song is actually about fucking which is pretty odd. We noticed that after the fact *laughs*. It feels good to be in a rock and roll band, I love being in one, like we play with a lot of bands on the road and you see these bands go out there and make out that their computer is running while they’re on stage, and dancing around when half the music is coming out of a computer pre-recorded, that’s never the case with us, man, and that’s never gonna be the case, we’re a live rock and roll band the way it should be.

You touched on it before with the whole ‘rock is dead’ statement, but what’s your take on where rock is these days?
I mean look, we play to hundreds if not thousands of people every night that assure us that rock and roll is not dead. I think that the most popular commercial music right now isn’t rock and roll, but that doesn’t mean that rock is dead. There was a time when rock ruled and it was probably 1972, outside of that there’s still awesome fuckin’ rock and roll out there and you can still pay your money and go see a live rock and roll band and I think rock and roll its popularity comes and goes but it’s never going away.

So, besides Buckcherry, who can you see as a new band out there flying the flag for Rock and Roll?
Well there’s a bunch of snotty nosed kids from Australia called Airbourne that kick major ass, we love those guys, we’ve been on tour with them a bunch, great dudes, great band. There’s a band out of the Southern part of The United States called Blackberry Smoke, great band.

You’ve been a part of the band since 1995 and obviously music and the scene is a whole different beast now, so what for you is the biggest change you’ve witnessed since the band’s inception?
Obviously we have an issue with record sales and record royalties and things of that nature, because it doesn’t take a fuckin’ scientist to look at the way that record sales have diminished, so I think when we first started there was no direct connection to the fans unless you saw them after the gig, like by your tour bus. Now, we’ve got social media, we’ve got direct marketing to the fans, we interact with our fans so much more and really I think while the audience may have gotten a little smaller, we can delve much deeper now with our fans.

We’re on the downward run to the end of the year, so let’s see if we can predict the remainder of it, so finish this sentence, by the end of 2015, Buckcherry will…
be on the road *laughs*… yeah well I went with the easy out. I don’t really want to predict anything but I know that this band is alive and well and happy and thriving and we love what we do, so if we’re not there today, we’ll be there soon.