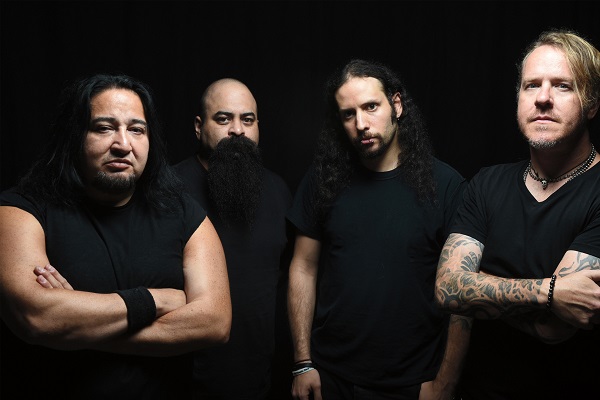 “Whereas now we just do what we do, we haven’t really changed our formula, we haven’t done anything too extremely different, we are who we are and that’s really all I can say about that *laughs*, obviously as technology evolves it helps us create records a little more easier and faster.”

From release: With Genexus, FEAR FACTORY forges a new hyper-alloy of sound, extreme and idea. Genexus is the sound of FEAR FACTORY in-extremis, it’s FEAR FACTORY bringing every weapon in its sonic arsenal to bear. From the concrete-breaking staccato riffs that open the record with ‘Autonomous Combat System’ to the soaring melodies of ‘Dielectric’ to the album’s elegiacal closer, ‘Expiration Date,’ Genexus is an unforgiving and unforgettable statement from a band that has long pushed the boundaries of extreme music.

In Columbia, South Carolina out on tour but while a restaurant for dinner, we chatted to Dino from Fear Factory about the band’s new album ‘Genexus’, its creation and new home at Nuclear Blast, as well as technology, staying true to the band’s sound, Australia and much more…

I’ve always enjoyed the band’s album titles, so I know you’ve answered it a million times, so maybe one more time can you tell us about ‘Genexus’ and what it represents?
I came up with the word ‘Genexus’ and basically it’s the beginning, obviously it’s a hybrid of two words together, it’s genesis and nexus together, so genesis obviously being the beginning and nexus being the connection. I don’t know how I came up with it but I did *laughs* and Burton came up with the story behind it.

Tell us a bit about the process of creating the album; did you do anything differently this time around compared to previous releases?
Well the last record ‘The Industrialist’ we had a drum program, on this record we had a live drummer because when we were working on ‘The Industrialist’ we didn’t have a drummer at the time, so we’ve had Mike Heller in the band for the past three and a half years or so and obviously that was the number one approach that we wanted to do on this record was to get live drums on it and kind of create a hybrid between organic drums and sound replacement that is a little more digital. So it was a combination of the two and it seemed to work really well. It’s got more of a human feel to it and at the same time it’s got more of a technical tone to it, you know what I mean?

It’s such a solid record and it flows perfectly, what was it like behind the scenes when producing the album this time around?
We were very well focused and we were all like we need to concentrate on making this record and we need to concentrate on trying to create the best thing we can do. One of the cool things is that we actually took our time, so we took a year to make the album which is really good, but in that time we actually did a lot of touring… we went to Australia, India, we went to China, but the main focus was to try to create this hybrid, kind of like what the concept is about, we wanted to create a hybrid of tones as well because Rhys Fulber produced the record, he’s produced a lot of our records before and he’s like the digital guy and Andy Sneap who mixed the album, he’s more of an organic guy he gets a certain organic tone and we thought that the hybrid of the two would be great. That was our main focus on the record.

This album also sees you guys over at Nuclear Blast and more importantly with Monte Conner, how did the return of that relationship help to shape the band and album to what is has become?
Well obviously Nuclear Blast is a marketing machine and they specialise in Metal, so going back and working with Monte Conner who signed the band to Roadrunner Records back in the early 90’s you know he got the band, he understood what the band was about, but going back there kind of reminded me what it was like back in the early 90’s when we first started.

‘Demanufacture’ is 20 years old this year so looking back at that record compared to now, and of course with a lot of changes technology wise, what are you able to do now that you weren’t able to do back then?
That’s a hard question, obviously technology has gotten a lot better, we have been able to perfect our craft even more, but you know, an album like ‘Demanufacture’ comes once in a band’s lifetime, I mean it’s like Metallica’s ‘Master of Puppets’ or Slayer’s ‘Reign in Blood’ you know, it’s like one of those magic albums that’s hard to duplicate, hard to do again. It was a time and place when all the world’s aligned and it was just one of those special albums. Whereas now we just do what we do, we haven’t really changed our formula, we haven’t done anything too extremely different, we are who we are and that’s really all I can say about that *laughs* , obviously as technology evolves it helps us create records a little more easier and faster.

Where many have had to somewhat adapt to find their sound, Fear Factory have always stayed true and been pioneers and remained relevant in the industrial metal scene, is this something you’re conscious of or is it just the norm for you guys?
Yeah we’re definitely very conscious of it, we definitely listen to a lot of different bands and we definitely stayed true to who we were and what our sound is, just like other bands who are in our genre *laughs* but when you hear a Fear Factory riff or a Fear Factory beat and you hear that voice, that distinctive Burton C. Bell voice, you know that it’s us. As far as being relevant we just try to be as much innovative as possible, I think that what we created years ago and sticking to the same formula today is pretty much what’s keeping us going.

Are there any bands out there at the moment that you are into that you see as up and comers in the industry?
Yeah there’s a handful of bands… we’re actually doing a tour coming up after this tour with a band called ‘Once Human’ which is Logan from Machine Head’s band, then another band on the tour is a band called ‘The Bloodline’ which is a good up and coming band. We try and give as many different bands as possible the exposure in front of our crowd, bands that we believe in and can be something special and sound different to the music world.

Australia has always been good to you guys, and we’ve seen you here quite often, what do you enjoy most about touring down here?
I think that you guys just get it, you guys got it first, Australia was the first country that ‘Demanufacture’ went gold in, so that said something, that said that this country really connects with this record first. Then obviously Europe, Europe was really big for us as well, we did a really big gold record in The UK as well for that record, and I just think over the years that certain parts of the word really get Fear Factory and Australia being one of the first countries.

Well seeing you guys at Soundwave here in Sydney showed me that yeah, we get it here, the crowds were insane…
Yeah and we felt it and not just Sydney but all through Australia, we felt the love and we were extremely happy the response that we got and it was like for us we have been touring Australia for some time now, since 1994 and it felt like ‘wow, this actually paid off’ all the hard work that we put into going Australia, flying across the world, playing in front of all those people it just felt like all this hard work paid off.

When do you think we can expect to see you back?
Good question, we’re trying to make it back hopefully some time mid next year, but don’t hold me to that but we’re trying to…

Lastly, let’s look ahead to the future, finish this sentence for me, by the end of 2015, Fear Factory will…
Will have pretty much toured around the world *laughs* and have another gold record in Australia…