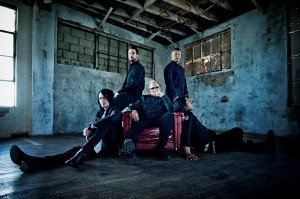 With just under a month to go, Everclear have announced the full list of local bands that will support the Portland power pop legends on their Sparkle and Fade 20th Anniversary Australian Tour.

In Adelaide Everclear will be joined by hard-hitting 4 piece The Motive and local psych rock favourites Glass Skies. Melbourne’s sold out show at The Corner Hotel sees the band joined by rock stalwarts Antiskeptic and Klinger, with Antiskeptic again playing the band’s second Melbourne show at 170 Russel along with The Drop Bears to kick off proceedings.  In Brisbane Everclear will be joined by a roster of quality local acts for the Eaton’s Hill Hotel FMX Festival including Aussie legends Bodyjar and Art vs Science along with The Strums and Antiheros.

Sydney fans will be treated to a massive night of grunge pop at The Metro with local stars on the rise Wasters and The Dead Love joining the party. In Newcastle Everclear have invited local power pop outfit Yours Alone along with pop rockers Capeside to celebrate the Sparkle and Fade anniversary.  Over in the West Everclear will finish up the tour with massive night at The Rosemount with popular locals Tired Lion and Pat Chow.

Lead by founder and main songwriter Art Alexakis, Everclear blazed a trail through the 90’s with their infectious hooks and articulate lyrical content, scoring multiple smash hits and galvanising a generation of long-time fans. To celebrate the 20th Anniversary of Sparkle and Fade, Everclear are back to treat Australian fans to a live incarnation of this game-changing album in full, songs from the brand new album Black Is The New Black, plus all your favourite Everclear singles!