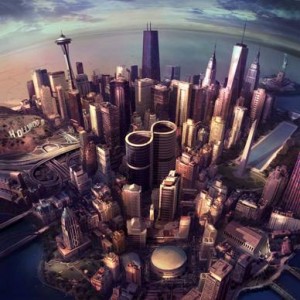 When the Foo Fighters announced they were going on hiatus after they finished touring for ‘Wasting Light’, many were surprised, not sure of what that meant or how long it would actually last, but thankfully not too long as when the band decided they were ready to come back, well, why not do it in a big way… A series on HBO, huge tour announcement, all this of course off the back of this new album ‘Sonic Highways’. What will it have in store? Let’s take a ride…

“Now here I go…” Sums it up as I’m ready to dive in to ‘Sonic Highways’ and as it opens with lead single ‘Something From Nothing’ which has a bit of a ‘Holy Diver’ feel about the riff to it, what was interesting to me on first listen to this was the way Dave kept his vocals very low early on and of course that didn’t last long as he belts out the song from the midpoint onwards where it just rocks out, this one is destined to be a live show staple and if that’s what we’ve got coming for the rest of the album then watch out… ‘The Feast and The Famine’ and its interestingly compressed drums at the beginning confused me a little but by the time I got to here it’s just exploded into the rocker it deserves to be, a straight up Foo Fighters song, Dave sounds great, the playing is killer, I mean this is tight… and big rock ending and scene…

‘Congregation’ is instantly recognizable as a Foo Fighters song, it has their style and sound all over it and that’s a good thing in my books plus with Zac Brown on this one to give them a helping hand it kicks it up a notch, then ‘What Did I Do? / God As My Witness’ is a catchy ditty, and with guest Gary Clarke Jr. on lead guitar, they’ve written and performed one cool song, the breakdown, slower parts are the perfect balance in this song that allows it to build up in this two part song that just works, whereas ‘Outside’ is a slower more groovy type track that has a classic rock vibe to it, especially the instrumental section it takes mid song that builds back into the outro, it sounds great. Oh but within seconds of ‘In The Clear’ I’m happy, the single downstrokes on the guitar for the opening verse, the simplicity of this arrangement early on is truly capturing as a kick drum joins the guitar, but the chorus rocks it up and makes this one a favourite so far, oh, that’s it, got me with your ‘whoa ohs’ love it. Side note, what I’ve enjoyed about watching the career of the Foo Fighters is their growth, the way they now make music and for that matter simply write songs, you can hear it, if you go back and check in on their earlier stuff you’ll hear the difference, besides ‘Everlong’ that song is just genius we can’t compare anything to that, but everything else… You know what I mean? There’s a level of maturity here as they all continue to make music, plus it also helps that you’ve got one of the best rock drummers out there in Taylor Hawkins keeping the beat going… So as a gang of musicians, the Foo Fighters are doing ok.

Slower once again with ‘Subterranean’ and this six minute track feels like it’ll take us on a bit of a journey. Now, while this one isn’t my favourite, I get where they’re going, but I have to say that I do prefer it when the Foos rock the place, I’ve found that sometimes their slower ones while great songs just don’t have that hook, so with half an album to go, prove me wrong, Foos. Whoa, if the six minute track just gone wasn’t enough, here’s the seven minute ‘I Am a River’ and after its extended intro, and big tease of something after the verse I wait… Wait because I know something big is coming… Here it is… Yeah I like this one, and even though he keeps reminding us that he is a river, the musical production on this track is the standout, nice work Butch Vig, and now with Pat Smear back in the band and on his second record back, the extra layer and tone of his guitar really helps to fill the songs out, also not forgetting to mention that Joan Jett played on this one specifically too so the wall of sound is intense here. Oh man, this song just keeps getting better, strings now?! Just stop it!!! Oh… They did stop it, that’s the album… Please Sir, can I have some more?

Where the Foo Fighters truly shine is on the stage, seeing this band live is an experience, and one I suggest you be a part of if you haven’t before, as these new songs will go down perfectly, as they should, and I know I’ll be there rockin’ out. ‘Sonic Highways’ is 42 minutes of great songs, great playing and great production. Welcome back, Foos. Time to press repeat… Once again, “Now here I go…”

Track Listing:
Something from Nothing
The Feast and the Famine
Congregation
What Did I Do? / God As My Witness
Outside
In the Clear
Subterranean
I Am a River