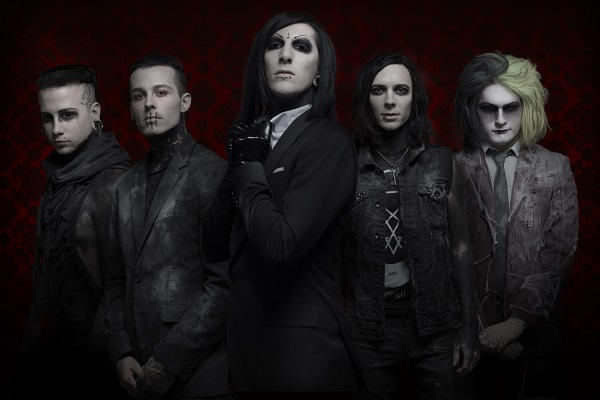 “Not that we’ve died and gone and came back but we feel that we’ve put a lot of what we used to be and things that we weren’t fond of and our mistakes of the past, we just buried them and let them die and came back as the new entity that we are now…”

From release: Motionless In White have carved out a corner in the metal scene with their aggressive electro-tinged anthems, crowd-empowering choruses, and dark and profound message. Noted for their ability to shock and awe with their music videos, the band has amassed over 20 million views on YouTube, and been nominated for their video work in the Revolver Golden Gods Awards 2014, Metal Hammer Golden Gods Awards 2013, and Kerrang! Awards 2012.

In Roswell, New Mexico on an off day and while the other band members alien hunt, we had a chat to Chris from Motionless In White about the band’s new album ‘Reincarnate’ as well as Australia and much more…

You’ve just released ‘Reincarnate’ so tell us about the album title and what it means to you…
Yeah to us it’s just been a title that’s very representative of showing that we are not a new or different band but a reborn and reincarnated band from what we used to be. Not that we’ve died and gone and came back but we feel that we’ve put a lot of what we used to be and things that we weren’t fond of and our mistakes of the past, we just buried them and let them die and came back as the new entity that we are now, and it’s a lot more confident, a lot more stronger, just a lot more of everything that we did like about the band and that’s what it means to us. I know that’s probably not everyone else’s interpretation of reincarnation but that’s what it means to us in relation to the album title and the band.

Now, as it is your third album, I want you to give me three words that you feel sum up the album perfectly…
Oh man… diverse, angry and energetic. It’s funny *laughs* I never know what to say but they’re the three accurate ones I believe.

With it being your third album, did you go into it with any ideas of doing things differently compared to your first two releases?
Yeah like I said with the reincarnate title we took a lot of the mistakes and the things that we felt negatively about the past two records and just went into a room and let them die and went in with a fresh mindset and that was to work with people that understood what we wanted to do this time, to approach writing in a different way where we weren’t going to make things that didn’t want to work together work together, and just overall a lot sounder and clearer mind and a lot more open mind to trying things that we hadn’t before and it ended up working out amazing as we wrote too many songs for this record which is the first time that’s ever happened to me in the world, so it was just a cool experience to see everything just work out great without any snags, I was kind of wondering when the big fall out was going to happen but it didn’t happen yet…

Yet? *laughs* it’s like you’re still waiting…
yeah, I’m a pessimist so I’ll be waiting for forever.

As you were just saying, it felt easier this time around but did you feel more pressure to deliver?
Absolutely, I felt more pressure than I did with this record than I did any of the previous two because I felt a lot of pressure with the first record as we were finally putting a record out and establishing ourselves on a label and as a band, and I wanted our label to like it and I wanted our fans that we had to like it, but it wasn’t the same type of pressure. This record we’re coming off of a record that fans weren’t exactly too happy with, so it was like well this is a do or die situation like where if we put out another record that fans just hate we’re not going to be a band for much longer, they’re not going to allow that to happen. So this was very stressful in the pressure department to make sure we were entirely happy and supportive of the record ourselves in hopes that the fans would be on board as well, thankfully it seems that way, well at least I think so…

So in terms of the tracks, was there a specific inspiration or influence that helped you write them?
It was more so just that we were having so much fun, we didn’t want to stop writing stuff, like why would we stop writing if what we are writing now even though it’s too many songs, who’s to say we’re not going to like it more than one of the ones we already have? So we wrote up until pretty much the last minute until we could have and then chose what we wanted to do and what we wanted to take and really go all the way with in the studio, so it was just us having a great time in the first time in our writing history, it’s always been stressful before this record.

You finished the ‘Puppets’ trilogy too which I love the fact it was spread over the three albums, can we expect maybe the after credits scene appearing on the next album or are the Puppets done?
*laughs* No this is it, no more ‘Puppets’ songs, thank God. There’s really shouldn’t have even been a third one but I really wanted to give the two other songs closure for myself and the fans that really followed it closely over the past two records so I felt that I owed it to them and myself to make the third and final one.

You got some great guests on the album such as Dani Filth and Maria Brink, how did you get them involved?
Two very different stories, Maria is a very close, personal friend of ours, we’ve toured with ‘In This Moment’ many times before and her and I have just always stayed in touch and we’ve worked together in music videos now and music and it’s just really cool to have that kind of relationship with somebody that’s in another band and one of your peers, so that was just me reaching out to her wanting to do a duet song and it just worked out great. The Dani Filth situation was much different because I don’t have a personal relationship with him so I just kind of blindly reached out to see if he was interested and got word back that he was and that kind of blew my mind and I turned into a fuckin’ fanboy for a minute. Sent him the lyrics, sent him the song, sent him the way I wanted him to sing the patterns of the song and he was cool with it, sent it back and *laughs* it blew my mind when I heard it as I couldn’t believe that Dani Filth was singing on one of our songs.

You were here earlier this year as a part of Soundwave, but when do you think we can expect you back in Australia for some shows?
We are desperate to come back it’s just finding the time that works and when it’s going to be the best time to come there, we’re thinking maybe early to mid 2015 to come there and do our own club tour to try that dynamic out instead of the outdoor Soundwave festival type situation where I feel like we don’t thrive as much, so very anxious and desperate to come back there and do a club tour.

Do you have a favourite memory of a trip down here?
Probably the first time I ever saw Sydney, I was like ‘holy fuck I would move here’ before I even really got to go into the city or even experience it I though man, this is awesome, and then getting to play the show and seeing the crowd being massive and everything about the Soundwave show two years ago and just being in the city was amazing. I felt the vibe of being home, so that’s my greatest memory, unfortunately the only negative thing about Soundwave is you have to be on a plane for so many fuckin’ hours which I absolutely fuckin’ hate, so I try to not think of that when I think of Australia.

Next year you’ll have been in this band for ten years, so let’s look back, do you have one moment that stands out above all others?
Wow… I mean it’s funny, some people consider us to be a band for ten years, some people for six, some people have different periods of time because there’s been different stages, and I don’t consider the band to be a band for ten years because we’re not, there’s no original members left besides me, the only similarities to the earlier portion of the band is the name and that’s it, there’s nothing else about it that I feel is the same band, so I guess you could say that the name has been around for that long. I guess probably just the moment where we got the call that Fearless wanted to sign us, because as a band we were out there struggling doing DIY touring in a van and trailer for a very long time before and after Fearless signed us, but when you’re a kid out there touring your ass off and writing stuff and busting your fuckin’ ass on Warped Tour every day it’s just your ultimate dream to get that call from a label having them want to sign your band. So that’s always going to be an everlasting memory of getting that call and feeling that feeling  of we did it, we fuckin’ did it, we busted our assess and finally all our hard work is paying off. That’s probably going to be the one that lasts forever with me.

Lastly, let’s predict the remainder of the year, so if you can finish this sentence for me. By the end of 2014, Motionless In White will…
have taken over the world and made every man wear makeup…

Well you’ll need to do something as I’m told makeup is ridiculously expensive here…
Alright, to conquer the world, to live in Australia and bring down makeup prices *laughs*