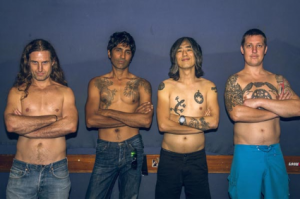 Within a proverbial blink of an eye, the legendary punk / pop / metal / psych hybrid Sydney band the Hard-ons turns 30 in 2014. To be precise, on the 21st of July 2014 the middle-aged yet brilliant trio will celebrate the 30th anniversary of their inaugural public appearance. In 1984, on that day, the multiracial band of bare-chested teenage misfits climbed onto a pub stage for the first time. It is fair to say, they have not looked back.

On surface, the Hard-ons were doomed: a Croat, Sri-Lankan and a Korean collectively playing pop, punk AND metal music at impossible volume and velocity at a dark prehistoric time when fascist punks and elitist indie snobs ruled the roost in Sydney, the Hard-ons paradoxically survived and thrived once they crawled out of the primal Punchbowl ooze.precisely because of their initially perceived unattractiveness. The one thing Australians love is an underdog. Another thing the Australians love is somebody who has a red hot go. The Hard-ons were underdogs personified and they had a huge go. Unburdened by any sense of prefabricated style nor scene-specific sound, the teenaged Hard-ons let loose upon the bewildered and unsuspecting underground music scene with their previously unthinkable mix of punk, metal, garage, thrash and bubblegum pop! Their shows were and still are, wildly unpredictable action-packed affairs, providing ear-shredding volume and an upliftingly beautiful gaggle of melodies in equal measure!

To celebrate this milestone of 30th anniversary, the Hard-ons welcome the temporary return to the band, original member Keish de Silva. Together, as a four piece consisting of original members Peter “Blackie” Black, Ray Ahn, Keish de Silva as well as current member Murray Ruse, the Hard-ons will for the first and last time in their career, tour the breadth of Australia and play entire sets consisting of only songs from their first incarnation pre-initial break-up; the years spanning 1984-1993! The set which the Hard-ons will play will be made up entirely of songs most requested by their fans from an on-line fan opinion poll! This first formative decade had given the band a record 17 consecutive number 1s on the Australian alternative charts, as well as several notable hits abroad. Never finding nostalgia anything but distasteful, the Hard-ons have however rightly succumbed to the need to pat themselves on their collective backs for a job well done in the past 30 years, the 6 years when the band was in uncertain hiatus (1994-1999) notwithstanding, AS WELL as give something unique and special back to their unwavering loyal fans. Make no mistake: these upcoming shows will be never-to-be-repeated historical events.

To help celebrate this occasion the Hard-ons will have in tow a brand-new 2CD remaster/reissue set of their major-label breakthrough album “Yummy” as well as a split 7″ single with Australian jazz legends “The Necks” (!!!). Never to rest on their laurels, the band will have available three more split 7″ singles AND a BRAND NEW album with the current line-up just after the tour as well!!! It is reassuring and refreshing to reflect upon an utterly unique Australian musical career. The Hard-ons are proof that you don’t have to get high rotation on radio nor be flavor of the month to have a fruitful and eventful career in music. You just have to have talent. And to have a go.