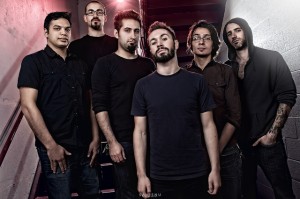 Periphery represents the vanguard of addictive, chaotic, challenging and cathartically inviting heavy music for the modern era. Their triple-guitar attack and rhythmic dexterity has won them devoted adherents across underground subcultures, regardless of whether those fans were weaned on the passion-fuelled sounds of progressive rock from bands like Dream Theater or Rush or modern avant-garde rock bands like Deftones.

The new experimental recording, Clear, represents the sum total of Periphery’s unrivalled achievements and will be released on January 24.

Jake Bowen (guitars) states: “Clear is an experiment to explore all of the different writing styles in the band. It’s rare when you have a band where every member is capable of writing and producing music. With each member controlling their own track, this recording enabled us to go down any path we chose in terms of style and sound.

“Every track also contains a melodic theme established in Clear’s intro track Overture this common thread links all of the songs together, even though they all sound wildly different. Clear shouldn’t be confused with our new 3rd full-length album that we’re currently working on, nor should it be considered an EP as it rides somewhere in-between clocking in at 30 minutes. Enjoy!”

Check out our recent interview with Nolly of Periphery HERE

Periphery will to head to Australia in the New Year playing three East Coast shows with special guests Animals As Leaders.