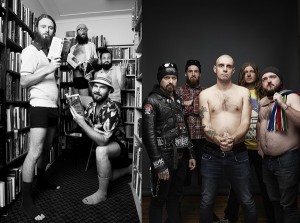 Merry fucking Christmas!  KING PARROT and GAY PARIS are set to smash their way through the East Coast in the perfect accompaniment to the impending holiday season.

Melbourne five-piece KING PARROT is a force of nature unto themselves, smashing together thrash, death, grind and punk rock into something uniquely skull-shattering. Renowned for their aggressive, no-holds-barred, and always confronting live show,  since their emergence onto Australia’s live scene in 2011, their relentless assault on the scene and the studio has seen them become kings of the genre.  A major drawcard on Australia’s Bastardfest, Obscene Extreme, Devil’s Kitchen, Dead of Winter, Cherry Rock and Whiplash Festivals, KING PARROT have now been added to Soundwave Festival as the only Australian band on the country’s biggest heavy music festival in 2014, as well as taking home the crown of Best Heavy Album at The Age/Music Victoria Awards for their latest album Bite Your Head Off.

GAY PARIS is a dirty fucking rock band from Sydney. They play music that grabs you by the chest, hands you a whiskey and makes you dance well past your bedtime, every time. While the band are at home in the Blues/Swamp/Rock genres, they are also completely compatible with pop, metal and even folk bills, sharing stages with likes of Karnivool, The Beards and The Snowdroppers. With their massive hooks and furious live show, the band is a rallying point to anyone looking for a good time. After being recognised as one of the highlights of BIGSOUND by Rolling Stone, and their new single Trash Bird at Confessional getting some major love from the UK’s NME, GAY PARIS have emerged from the metaphorical desert to add their super sharp, astoundingly inventive and often naked live stylings to the monster that is this forthcoming tour.

Stand transfixed and/or cower in the presence of KING PARROT and GAY PARIS at these dates: