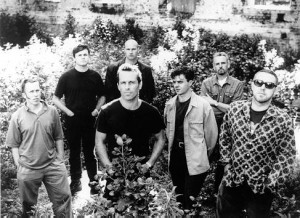 “The reputation of the band – its iconic status, so to speak – was built up over constant touring, just this relentless approach to getting out there and playing for years and years and years. It was very much about being in a pub and having thousands of people jammed into a room, with this big, incredible sound. There was unity, there was pride and a total lack of bullshit.” –  Mark Seymour Sept 2013

It’s the news fans around the country have been waiting for.

Appropriately kicking off on the Australia Day long weekend in January and stretching across weekends until mid April, this powerhouse Australian outfit is once again set to enthral and thrill not only devotees from the past, but also a whole new generation of music lovers.

Hunters & Collectors will be joined at the majority of winery shows by You Am I, with Diesel taking the stage at the others.  Something For Kate and British India, who both pay tribute to the Hunters on the ‘Crucible’ album, will be special guests at all winery shows.  The Panics will be the supports for the theatre shows.

The tour news comes amidst a hub of recent Hunters & Collectors activity – their upcoming performance at the AFL Grand Final this Saturday, as special guests at Melbourne’s two Bruce Springsteen concerts in February, and most importantly, the release of “Crucible – The Songs Of Hunters & Collectors”, the lovingly curated album featuring 15 stunning tributes from the likes of The Living End, Birds Of Tokyo, Neil Finn & Eddie Vedder and Paul Kelly accompanied by 15 original H&C recordings (out tomorrow through Liberation Music).

The album is testimony to the extraordinary Hunters & Collectors legacy, one that was built not only their uniquely-Australian songs and Mark Seymour’s razor sharp lyrics, but also on their commanding and powerful live performances. The album has been the fillip for the band’s reformation.

Ask anyone to describe a Hunters & Collectors gig and words like ‘primal’, ‘sweat-soaked’, ‘intense’, ‘ferocious’ come to the fore. Few bands made their mark in the live landscape like ‘The Hunnas’ did.  It was a badge of honour they wore with pride and fought to sustain at every show –approaching 2000 of them across 15 countries – resulting in a profound connection with audiences everywhere.

When they called it a day in 1998, Hunters & Collectors was a multi-platinum selling band, with five top 10 albums boasting classic songs like ‘Throw Your Arms Around Me’, ‘Talking to a Stranger’,‘ Holy Grail’, ‘When The River Runs Dry’, ‘Do You See What I See’, ‘Say Goodbye’ and countless others.

In 2005 they were inducted by Peter Garrett into the ARIA Hall of Fame. In March 2009 the Sound Relief benefit concert at the MCG brought them temporarily out of retirement, with a set that won rave reviews:  “The band’s visceral, gutsy performance makes us feel proud of our musical heritage” (Inpress); ”they had people everywhere hugging and belting out the words to some Aussie classics. All delivered to rapturous response: (Beat Magazine) and “they sounded like they had never stopped touring – an amazing set.” (Richard Kingsmill Triple J).

YOU AM I continue their 20th anniversary celebrations saddling up to join the tour. It’s been a delight to enjoy this year’s reissue of their first three seminal albums ‘Sound As Ever’, ‘Hi Fi Way’ and ‘Hourly Daily’ and to see the band in such fine form in their birthday year.  After a show here and there, this will be You Am I’s first major tour for a day on the green.

SOMETHING FOR KATE – vocalist Paul Dempsey, bass player Stephanie Ashworth and drummer Clint Hyndman – jumped at the chance to be involved in the tour and the ‘Crucible’ album, (covering one of Dempsey’s personal favourites ‘When The River Runs Dry’).  In the past decade they’ve sold over half a million records and released five top ten albums, their last 2012’s ‘Leave Your Soul To Science’ debuting at #1 on the ARIA chart.

After 14 albums and 25 years, can it be possible that DIESEL, aka Mark Lizotte, continues to raise his own musical bar? The multi ARIA-award winner, recognised as a prodigious talent both on stage and in the studio, has proved himself a master of multiple genres, blending bits from all of them to create his own truly unique sound. His trademark virtuoso guitar playing and soulful vocals always ensure an electrifying live show.

With strong support from Triple M and alternative radio, Melbourne quartet BRITISH INDIA’s last three albums have all debuted in the ARIA Top Ten.  Led by vocalist/guitarist Declan Melia, the band are regulars at festivals like Big Day Out, Splendour In the Grass and Homebake. They also feature on ‘Crucible’ covering ‘Do You See What I See’.

General public on-sale from 11 October @ 9am

A DAY ON THE GREEN SHOWS
All event information www.adayonthegreen.com.au

Saturday Jan 25 – The Hill Winery, Geelong VIC
With You Am I, Something For Kate & British India

Saturday Feb 1  – Bimbadgen Winery, Hunter Valley NSW
With You Am I, Something For Kate & British India

Sunday Feb 2 – Sirromet Wines, Mt Cotton QLD
With You Am I, Something For Kate & British India

Saturday Feb 8 – All Saints Estate, Rutherglen VIC
With You Am I, Something For Kate & British India

Saturday Feb 22 – Leconfield Wines, McLaren Vale SA
With You Am I, Something For Kate & British India

Saturday March 22 – Rochford Wines, Yarra Valley VIC
With You Am I, Something For Kate & British India