Sleeping With Sirens + Woe, Is Me + Memphis May Fire Sidewaves announced! 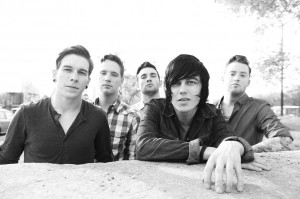 Now three years into their existence, the post-hardcore quintet SLEEPING WITH SIRENS continue to evolve and mature as artists, gradually shaping their unmistakable blend of fury and melody into a sound that’s wholly their own. The band’s new five-song acoustic EP, ’If You Were a Movie, This Would Be Your Soundtrack’, presents another crucial step in the band’s ongoing journey toward their sonic destiny. “It continues to show off their knack for creating killer pop melodies while displaying some versatility in their songwriting. It’s easy to hear why this band has been deemed one of the next big things in the scene.” – Absolute Punk

With a live energy that matches the intensity of their albums, SLEEPING WITH SIRENS will be tearing up Sydney and Melbourne for two Sidewaves only!

A band that shows endless perseverance; WOE, IS ME have proved themselves to be a continuous sign of not only hope, but an example proving that it’s possible to overcome even the impossible.

Their sophomore album ‘Genesis’ is jaw-dropping and brutal yet deliciously poppy and inspiring. This is the beginning of something new, something of vital importance to the modern music scene that carries with it a message of consequence

MEMPHIS MAY FIRE have consistently pushed the envelope to redefine both themselves and the various sub-genres they’ve made their mark within. Their fresh approach to an otherwise stale scene gathered critical acclaim and facilitated the delivery of their music to the masses and established a live precedent that the band continues to build on today.

Fast forward to 2013 and MEMPHIS MAY FIRE have broadened their reach and welcome a new world of possibilities within the scope of their burgeoning career. Their high-octane live show acts as a testament to their ever-increasing identity and always leaves the audience wanting more. Their latest album ‘Challenger’ “is exactly what its namesake implies – it’s a battle cry, a war. MEMPHIS MAY FIRE have been near breaking point for years and they waste no time letting it rip this time around.” – Absolute Punk