I AM GIANT Australian Tour 2013 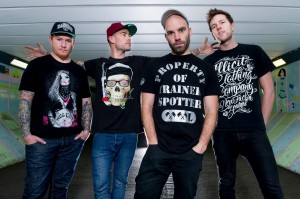 I Am Giant are returning to Australia in February 2013– their first dates since their support slot with Slash this September.  Leading up to the Australian dates, the band will be touring around the beaches of New Zealand with rock heavyweights Shihad and King Cannons.

I Am Giant recently released their debut album ‘The Horrifying Truth’ (produced by Forrester Saville) in the UK and Europe in October, and their single ‘Purple Heart’ won support on BBC Radio One as Zane Lowe’s ‘Next Hype’ , XFM, Kerrang! Radio and Q Radio as well as hitting the No 1 spot on Polish Radio Eska Rock. Second single ‘Neon Sunrise’ featuring surf legend Kelly Slater will be released in Feb 2013.

With over 56,000 fans on Facebook and over 1,000 international members of their ‘IAG Army’, I Am Giant have amassed a worldwide following with four #1 rock singles and a platinum album in New Zealand, music videos featuring skate and surfing icons Tony Hawk and Kelly Slater, opened for Slash in Australia, a UK tour with Taking Back Sunday, performances at Big Day Out in Auckland and Sydney, opened for Stone Temple Pilots in Singapore, toured throughout Asia several times, played the prestigious Viper Room and Mercury Lounge in the US and completed their first European tour.

Tickets go on sale Tuesday 18th December at 10am

Tags I Am Giant RiSH Publicity