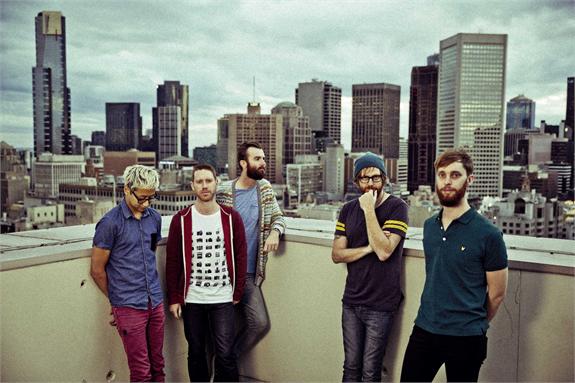 Australia’s epic Birds of Tokyo announced today that their fourth full-length studio album will be called ‘March Fires’. Appropriately, the highly anticipated work will land on March 1, 2013. The band will kick start the release with the ‘March Fires Tour’ crisscrossing the nation from late February onwards presented by triple j and Channel [v]. It will be Birds of Tokyo’s first national tour in 18 months and tickets for all shows go on sale this Friday, December 14.

The ‘March Fires’ tracklisting will be as follows:

Dates and venues for the ‘March Fires Tour’ are listed below. Special guests on all dates except WA, will be buzzing rock band Regular John plus opening artists to be confirmed.

The band’s recent release of the four-track EP ‘This Fire’ and a handful of special preview shows (including a barnstorming set at the Homebake Festival) have provided fans with their first taste of the new Birds of Tokyo. The EP’s lead track has been one of the most requested and most played songs on the triple j network over recent weeks, and is still climbing the national airplay chart.  The award winning Kris Moyes directed its unique video. Check it out HERE.

For Birds of Tokyo, the last year has been all about change and renewal and that experience is infused throughout their new album.

First there was the addition of two new members (Glenn Sarangapany on keys and Ian Berney on bass). Then for various reasons the three original members (Ian Kenny – vocals, Adam Spark – guitars and Adam Weston – drums) all relocated from their hometown of Perth to new cities across the eastern seaboard. After that they consciously reinvented their approach to songwriting with a new Sydney studio space plus time spent together in a remote French farmhouse helping to blaze new trails.  And if that wasn’t enough, they then went to Los Angeles to record with both a new producer, Dave Cooley (Silversun Pickups) and a new mixer, Tony Hoffer (M83, Beck, The Kooks, Belle & Sebastian).

“We really made a conscious choice to just put a match to everything we’d done before so that we could create something that felt fresh and exciting for us. Hopefully people who like the band will feel the same way when they hear it”, explains Adam Spark.

Over the course of their first two studio albums (2007’s “Day One” and 2008’s “Universes”) Birds of Tokyo carved out a niche for guitar driven anthems. Lots of touring around Australia gradually turned them into indie chart toppers. Their eponymous third release in 2010 shifted things up a gear with double platinum certifications and hit singles “Plans” and “Wild At Heart”. They received songwriting awards from APRA, had their work voted “Rock Album Of The Year” by their peers and then capped it all off by winning the publicly voted gong as “Most Popular Australian Artist” at the 2011 ARIA Awards.

Not surprisingly their heads were swimming. But rather than milk a formula they decided to throw themselves into new ways of being a band.  Burnt it down.  Started again.

The result is ‘March Fires’.  The album’s title directly reflects its phoenix-like conception plus in the northern hemisphere the March fires are typically a natural source of renewal each spring.

Don’t miss Birds of Tokyo live in 2013 as they launch ‘March Fires’ from coast to coast. Stay tuned for much, much more.

On Sale GP: Friday 14th December @ 9am except Melbourne, Sydney and Brisbane on sale @ midday.

With special guests REGULAR JOHN (all dates except WA)
*All shows 18+ except if noted.

BIRDS OF TOKYO | ‘MARCH FIRES’ | TO BE RELEASED MARCH 1

PRE-ORDER THE ALBUM NOW FROM HERE