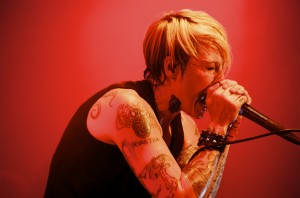 Lead by artist, activist & intellectual loudmouth Otep Shamaya, Otep have been producing their own brand of uncompromising alternative metal since the later half of 2000.  Showcasing a fearless passion for justice & the preservation of the arts, Otep create uncompromising soundscapes with heart and substance, not content to merely produce music that in itself is revolutionary, but art that has the ability to promote real change.

In late 2000, singer Otep Shamaya brought her Marilyn Manson-meets-Kim Gordon vocal stylings to a crew of L.A. musicians known only as Rob, Moke and eViL j.  Naming themselves Otep after their wild singer, the foursome began gigging around L.A. and quickly scored a deal with Capitol solely on the strength of their live show. After releasing the Jihad EP the following year, rumors of cannibalism and dabbling in the mystical arts began to appear in local press and added to the band’s already mysterious image and drew praise from the likes of Marilyn Manson who was enamoured by their wild antics.

In 2001 the band played their 8th ever show at that year’s Ozzfest, then stepped back into the studio with Terry Date to record their full-length debut, Sevas Tra, which was released in the summer of 2002. In that same summer they joined up with the Ozzfest tour again, scoring  a prime spot on the second stage where they received gushing reviews and turned on a legion of new Otep fans.

In 2004 the group released its sophomore effort, House of Secrets then followed it up three years later in 2007 with The_Ascension which was produced by Dave Fortman (Evanescence, Mudvayne). That spring the band teamed up with Static X to take the new album out live across America.

2009 saw a major line-up change with members of the band Destrophy joining the band with only Otep Shamaya as the original remaining member.  Otep Shamaya signed with Victory Records, where she has continued under the band name Otep and released 2 studio albums, Smash the Control Machine and Atavist.  Her sixth studio album Hydra is due out in January 2013.

Tickets On Sale 29th of November @ 9am AEDT