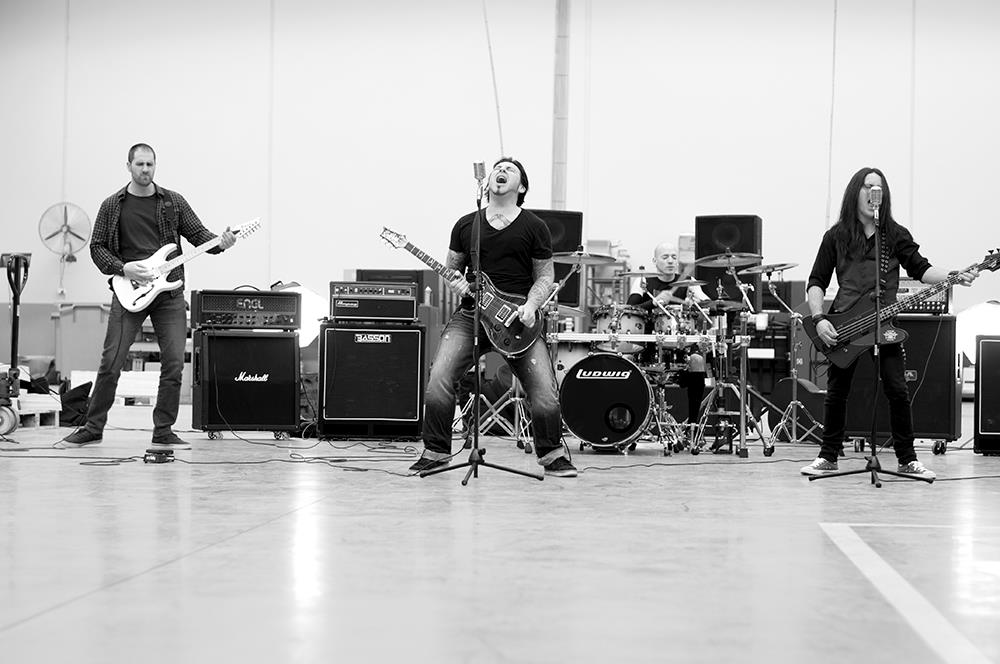 Whilst the name Moments Apart may be a new entity in the Melbourne music scene, the members thereof will certainly not be new to those of you with a couple of feet firmly entrenched in the Melbourne rock scene.  Essentially, the origins of Moments Apart rise from the ashes of the band formerly known as Teargas – which some of you may know as those ‘crazy’ melodic rockers, or some may know from their transformation with ‘hearts of darkness’ and ‘bleeding vengeance’ into a sound heavily influenced by the metalcore sounds of the time (2007’s).  Well fast forward 5 years and now the guys return to launch Moments Apart where it’s all about a powerful assault of anthemic modern rock & metal that is high on blistering guitar solos, massive choruses and intricate arrangements.  If you think that description sounds like a cross between Shinedown, Alter Bridge and Stone Sour, then you’re pretty spot on.

Their debut EP Collision is due out on November 10th and first single/video Self(ish) Control has already been unleashed.  Launching the EP at The Evelyn Hotel on November 10th, the band will be joined by Heaven The Axe, Ten Thousand, Copse and The Vendettas.  Get your tickets to the launch and a copy of the EP from the Moments Apart online store by clicking right here…. http://momentsapart.bigcartel.com

Let’s start with the basics first, Moments Apart are a brand new band to hit the Melbourne scene, tell us what the band is all about musically?
Equal importance on power and melody.  The songs are built around hooks but coloured with heavy guitars and big crashing drums.  Our influences are varied, but all come back to the importance of catchiness and well-crafted arrangements.  This is what we’re hoping to achieve with our sound. We are a hard rock band with the discipline of metal, but the accessibility factor of rock.

Whilst you are a new band, the members of Moments Apart are no strangers to the Melbourne rock scene.  Can you introduce each member of the band and give us a rock ‘n’ roll fact or myth about each?
I don’t know how ‘rock’n’roll’ these are, but here goes! Haha!

Our drummer Looch is a big basketball enthusiast and leads a secret life as an A-grade shooting guard for the Eltham Blades.

Danny, on bass and vocals, is both a spectacular vegetarian chef and the god of thunder in his spare time.

Lead guitarist Kyle is an expert on Melbourne’s hotspots and can steer you in the right direction for a decent coffee and/or meal.

Myself, I have attempted (and failed) several eating challenges, and am now officially retired from the field.

You have your debut EP set to be released on November 10th, here’s your chance to tell us everything we need to know about it…
It’s called Collision and contains six songs that we feel represent Moments Apart in a complete way.  You have arse-kicking straight-up rockers, mid-tempo anthemic choruses, a power ballad, a heavy metal tune, plenty of solos, and loads of lush guitar textures and vocal harmonies.  We spent a long time writing and demoing these songs, so hopefully our painstaking hard work is evident in the end result.

Self(ish) Control is your first single and a video has just been released.  Tell us a bit more about this song, both in a lyrical and musical sense…

The song is the first track on the EP and we feel that it announces us.  It’s uptempo, has a fist-pumping chorus and loads of shredding guitar solos.  The lyrics represent an uprising against corrupt and backwoods powers that be. Rally the troops! 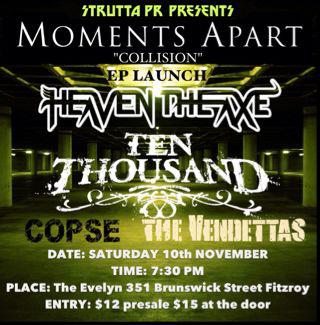 What do you feel are the key “ingredients” that need to feature in a Moments Apart song?
Basically it starts with a chorus.  Without a quality chorus you have nothing. Often, our choruses are written before anything else and the rest of the song is crafted around that.  Our guitars must be massive and chunky, but also lush and layered.  We like to make creative use of two guitars, so Kyle and I rarely play the same part.  There’s so much you can do with that and we like to exploit it fully. We don’t hold back with layers and polish- the epicness is a huge part of our sound, so each song needs to feel like an experience.

When it comes to songwriting, is there a typical process within the band – does it start from one person, or is it something that is a shared thing?
Usually it starts with myself, a guitar and pro-tools.  I’ll throw together a basic idea, often just a verse and chorus and send it to the other guys.  If everyone likes it and thinks there’s potential, I get together with Looch and we nut out a full song structure.  Then we go back and demo it fully with everyone adding their parts and ideas.  When the demo is complete, we sit on it for a while, listen back, let it sink in and marinate.  If we’re still psyched about it after a few weeks, we keep it.  If it doesn’t pass the test of time, it gets chopped!

How varied would you say are the musical influences of band member to band member?
Quite different, however we all seem to share common ground also – mostly the classic bands we grew up on; eg. Metallica, Van Halen and some more recent bands such as Stone Sour and Alter Bridge.  Danny is one of the biggest Kiss fans you’ll ever meet.  Looch is really into Dream Theater and progressive metal; Kyle loves a huge variety of guitarists from Malmsteen to Joe Bonamassa and everything in between.  Myself, I ‘m quite all over the place. One minute it’s Jeff Buckley, nek minnit, Cannibal Corpse!

If you were a person in the crowd at one of your gigs, what five words would you walk away using to describe the performance you just witnessed?
Powerful. Epic. Catchy. Meaningful. Twin-guitar-attack (hehe).

Can you remember the life defining sight, sound, touch and/or smell whilst growing up that made you think being a “rock star” was the path you wanted to tread?
Sure. It was seeing Alice Cooper’s Poison video on Rage as a 5 year old.  I was forever changed by the long hair, loud guitars and catchiness!  I still think that’s one of the best examples of pop-metal songwriting I’ve ever heard in my life – the way the chords move and the harmonies swell, it’s so well-crafted and arranged.  That particular song had such a profound influence on me and opened the floodgates of hard rock!

For the benefit of those reading this in galaxies far, far, away, how would you describe the current music scene in Melbourne/Australia and Moments Apart’s place within it?
There are some excellent bands out there, but Australia is such a small place. Unfortunately we’re not blessed with the dense population of Europe, Asia or the USA, so it’s really hard to get people to hear your stuff and come to live shows.  I try not to worry too much about it though – we love what we do and try to focus on that, rather than get down about how hard it is to “make it.” We only care about writing the best possible songs and playing them for whoever is kind enough to spare their time to listen, or come to a show.  Fitting in with a scene is not something I’ve given any thought to, we just wanna play.

Here’s a chance to gaze into your crystal ball, over the next 12 months, Moments Apart will have:
1. A lot more gig experience under our belts.
2. A $hitload of fun!
3. Enough songs to record our debut full-length album and have begun the recording process.

Check out our review of Collision right here…