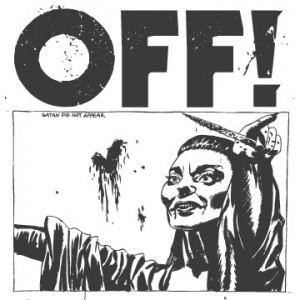 CD reviews aren’t necessarily an easy thing to write, some flow immediately, others can be agonised over for what seems like hours.  I guess much like writing a song hey?  The irony of this is that the new release from OFF! whilst having 16 tracks, clocks in at around 17 minutes in total, for the whole CD.  Does that make a review any easier, or harder, I’ve got less to listen to, and less to write about, right?  Or for that matter, can writing songs that clock in at around 1 minute each be any easier than writing a song 16 minutes long?  Shit, see already writing these first few lines as I listen to this album for the umpteenth time, the OFF! album has already flown through to Track 9.  What’s the point I’m trying to make, I really don’t know, all I know is that track 10, King Kong Brigade knocked my freakin’ socks off, pardon the pun.

The existence of OFF! may have been accidental – Keith Morris (Black Flag, Circle Jerks) Dimitri Coats (Burning Brides frontman), Steven McDonald (Redd Kross) and Mario Rubalcaba (Rocket From the Crypt)…certainly an interesting colliding of musical worlds, but it’s an accidental collision that has now produced 4 EP’s and now this, their first full length album.

Track after track is delivered at seriously breakneck speed.  I’m back on another run through now and two songs in and I’ve Got News For You, I want to smash shit up, no not the stereo, with this musical and lyrical aggression I’m hearing, I want to crash through walls, slam into people, but alas I’m home alone – that kind of smash shit up, but I’ll find something.  I haven’t seen OFF! live before, but I no doubt will next year when they are out here in Australia during the Big Day Out run.  If this band can transplant so much energy, rawness and beer drenched awesomeness onto recorded format, what is a live show going to be like?  All I know is that I wanna be there and Dimitri told me I need to be there, so I’m in.

For fans of: Hardcore and punk

Record label: We Are Unified