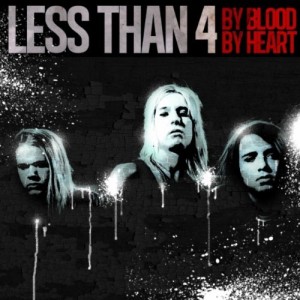 In 25 words – “By Blood, By Heart definitely propels Less Than 4 to be amongst the leaders of the new generation of Swedish sleaze.”

So here’s a quick quiz for you, what number is Less Than 4?  Well if you said 3, then you are correct and the relevance of this is that these cocky young whipper snappers from Sweden are a three piece that surely will rock the socks and jocks off anyone that digs the raw style of Swedish sleaze perfected by the likes of Hardcore Superstar, Backyard Babies and Crashdiet.  With all band members seemingly under the age of 18 – drummer Ludde Tornemalm is just 15, By Blood, By Heart is seriously one hell of an impressive debut album.

18yo singer/guitarist Max Landegren sounds like he’s been smoking cigarettes and drinking whisky for years with raw as razorblades style vocals that at times I could swear is really Jocke from Hardcore Superstar.  Quite simply if I didn’t know this was Less Than 4, I would swear to you it’s Hardcore Superstar circa their 2005, self titled album era.   Whilst Less Than 4 are obviously heavily influenced by the likes of Hardcore Superstar, songs such as Fucked Up Kid, By Blood, By Heart and Bad Like A Gun are more than worthy slabs of classic sounding Swedish sleaze in their own right.  The album is chock full of songs with massive hooks and choruses and the sound courtesy of Rikard Löfgren (Deathstars, Mama Kin, Hellfuelled, Le Mans) is top notch, balancing rawness and bigness.

In their bio, the band boldly claims to be “the band we’ve all been waiting for, since Backyard Babies & Hardcore Superstar became too old!”.  It’s been a few years since Backyard Babies have released a new album, but with Hardcore Superstar still going strong, it will be a few years yet before Less Than 4 claim the title of the kings of Swedish sleaze.  With that cocksure attitude and a debut album that many far more established bands could only wish they had released, and with the likes of Vains of Jenna having now fallen by the wayside, By Blood, By Heart definitely propels Less Than 4 to be amongst the leaders of the new generation of Swedish sleaze.  I’m eagerly awaiting to see what these guys deliver on album number 2!