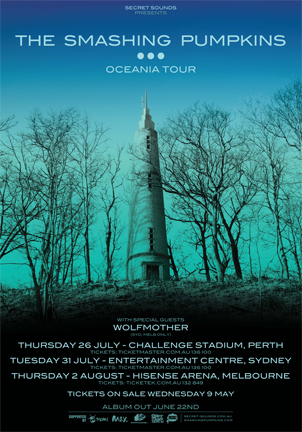 Secret Sounds are excited to announce that Splendour headliner THE SMASHING PUMPKINSwill be playing some very special sideshows in Perth, Sydney, Melbourne and Aukland, NZ. For these performances, as well as playing plenty of classic Pumpkins catalogue THE SMASHING PUMPKINSwill be debuting a unique stage design in Australia created to reflect the visual themes of their new album, “Oceania”.

Alt rock’n’rollers WOLFMOTHER will join THE SMASHING PUMPKINS as special guests in Sydney and Melbourne. WOLFMOTHER’S self-titled debut album catapulted them onto the national and international music scene when it picked up the J Award for Album of the Year, multiple ARIAs and a Grammy Award, going on to sell more than a million albums worldwide.