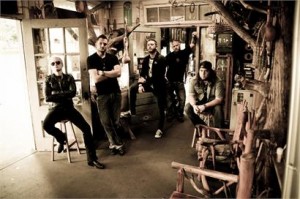 “I’m so excited and proud to announce that we have signed to eOne. Thanks to them the world will get a chance to hear this amazing collection of songs,” says frontman Jared Weeks. “Bringing Down The Giant” is the bands follow up release to “Miss America,” released in 2010. The band has been hard at work since then and want fans to know they are back. Weeks continues, “We have taken the last year to write and record the best songs of our career.”

Backyard barbecues, front porch jams, old-fashioned family values and hard-partying rock n’ roll is the name of the game for SAVING ABEL. A cross between Charlie Daniels and Tool, their songs cause guys and gals alike to shake what their momma gave ’em while pumping a fist in the air and serve as feel good anthems for American troops on military bases abroad.

Saving Abel combined meat and potatoes rock with their eponymous Gold-selling 2008 debut, which topped the Billboard Heatseekers chart. The record spawned the platinum single “Addicted” and the followup barn-burners, “Drowning (Face Down)” and the emotional “18 Days.” Their second album, “Miss America,” topped the Hard Rock chart and imprinted the hearts and minds of radio listeners with the title cut, “Stupid Girl (Only in Hollywood)” and another Top 10 single, “The Sex is Good.

After blazing their own path with two full lengths, six top ten singles with two of them reaching number one, SAVING ABEL is ready to break new ground with “Bringing Down The Giant.”