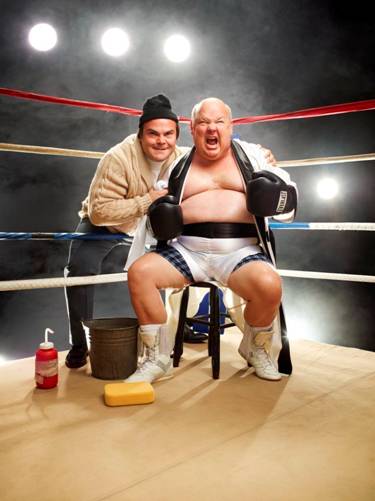 Sony Music Entertainment Australia announced today the May 11, 2012 release of Tenacious D’s widely-anticipated RIZE OF THE FENIX, the band’s first studio album in over six years. RIZE OF THE FENIX is the third album from the group and is the follow-up to 2006’s gold THE PICK OF DESTINY and 2001’s platinum debut album TENACIOUS D.

Produced by the brilliant John Kimbrough, RIZE OF THE FENIX was recorded in the garage behind his LA home and features Jack Black and Kyle Gass (Tenacious D’s core duo), performing with Dave Grohl (drums),  John Spiker (bass, piano, organ)and John Konesky (electric guitar). The album was engineered and mixed by John Spiker who has been touring with the band for years.

From their concentrated effort emerged thirteen profoundly evocative tracks, the making of which the band describes as a “journey similar to that of Gandolph in The Lord of the Rings.” When the ill received Pick of Destiny movie failed to strike box office gold, it virtually stripped away the duos rock god stature overnight. “There we no more bouncers waving us through the velvet ropes, we were persona non gratta” said singer Jack Black. Kyle Gass added, “There we were- just like Gandolph the grey, down in the muck- but we never gave up, We defeated our own personal demons and began chipping away, slowly climbing back to the land of the living- when we emerged we were no longer the old Tenacious D, we were Gandolph the white, with new powers and wisdom and bravery and skills.”

Rize of the Fenix was recorded over the past six years as Tenacious D went back to their roots. “We recorded down and dirty in a friend’s garage with a shoestring budget of 600 dollars, much like Nirvana’s first album “Bleach”-or the Beatles first album “Help”. Rough and yet a masterpiece.”

Rize of the Fenix song titles:
Rize of the Fenix
Low Hangin’ Fruit
Classical Teacher
Señorita
Deth Starr
Roadie
Flutes and Trombones
Ballad of Hollywood Jack and the Rage Kage
Throwdown
Rock Is Dead
They Fucked Our Asses
To Be The Best
39

Rize of the Fenix will be available everywhere May 11th, 2012.