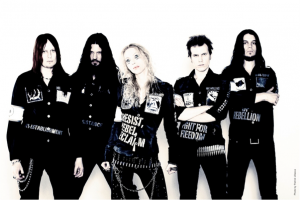 With nine albums under their belts, the guys and girl are masters of their craft. They have never been a band to do anything without 110% commitment and their new album Khaos Legions is a testament to that fact.

14 tracks of pure, honed intensity. The Amott brothers, Michael and Christopher, are in fine shredding form. The backbone, held strong via Sharlee D’Angelo and Daniel Erlandsson, is as furious as always and Angela Gossow’s instantly recognizable, hell hath no fury/take no prisoners vocal delivery puts all of her contemporaries to shame.

Arch Enemy will be bringing their trademarked sonic violence to our shores once again for 2 brutal shows in Sydney and Melbourne at the end of April.

If you’ve yet to see them in action, stop making excuses and get to a venue. If you don’t, we’ll tell Angela to come and kick your ass!!

ARCH ENEMY for TWO shows only

Tuesday 1st May, Melbourne – Billboard The Venue (with Teramaze & Elysian)

On sale from 9am Wednesday 22nd February from
www.metropolistouring.com