The Sisters Of Mercy Sidewaves 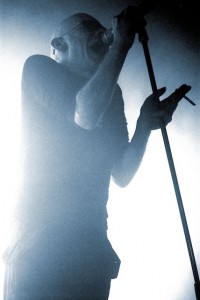 The band is also touring around the country as a part of the Soundwave Festival in February and March.

Despite numerous line-up changes, disputes with their record company that saw the band cease recording in 1990, legal battles and internal dissent, The Sisters Of Mercy have remained at the forefront of the underground scene since their formation in Leeds over thirty years ago.

Led by the ominous baritone vocals of Andrew Eldritch, with the infamous resident drum machine, Doktor Avalanche, Chris Catalyst and Ben Christo, the 2012 incarnation of The Sisters Of Mercy is “a lean and glittering groove machine for the new millennium, leaving the sullenly anachronistic reformations of their contemporaries far behind”. (Metal Hammer)

New and hence unreleased songs make up half of any Sisters set these days, although the classics get a good thrashing in rotation.  Having derived their light show from the Big Bang (gleefully inventing rave lighting in the process), the Sisters see no reason to tone it down, and will be exploding in all their usual glory.

Don’t miss you last chance to see The Sisters Of Mercy perform at the Corner Hotel on March 1.