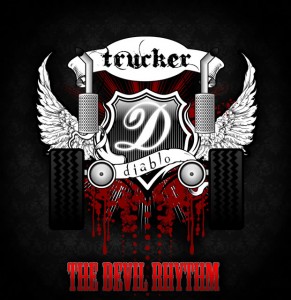 In 25 words or less: “This band needs to be heard, so listen, share, talk, tell everyone about Trucker Diablo…”

Loud, crunchy, fast riff driven, bass heavy, gang vocal laden, classic rock and roll is pretty much how you could describe Trucker Diablo. Did I mention they’re from Northern Ireland? No? Well you’d have no idea when listening to them that this was the case. Not that it makes a difference, it’s just so cool to hear bands from different places around the world that we can then share with you! So they came to us, now we give you Trucker Diablo and their album ‘The Devil Rhythm.’

Lead track and single ‘Drink Beer Destroy’ pretty much sums this band up, listen to this and you’ll be hooked! I was. It is pure rock, this song given the chance should be a hit! But oh no, as good as that was, it gets better, I actually prefer ‘Juggernaut’ which is next with it’s amazingly simple sing along chorus, featuring current Thin Lizzy vocalist Ricky Warwick this song is an absolute ball tearer! I can’t say much more about it other than you can’t stop this juggernaut from rolling…

Track after track of rock. That’s what we get, it’s no wonder these guys slayed the crowds at Download festival just gone, the passion you can hear in the performances would come across 10 fold on stage and I’m making it my mission to see these guys live one day. Then you get a song like ‘Black And Blue’ that gives us a riff heavier than anything Metallica has done in years and it’s amazing. Every song is as good as the next on this album, musically each song is as heavy as shit and it’s so good to hear a down and dirty rock band make an album like this.

Overall, this band needs to be heard, so listen, share, talk, tell everyone about Trucker Diablo now so you can be the one in a couple of years when they’re huge to say “I told you…”

Check it out if you like: Classic Hard Rock

Check out our interview with Trucker Diablo here…