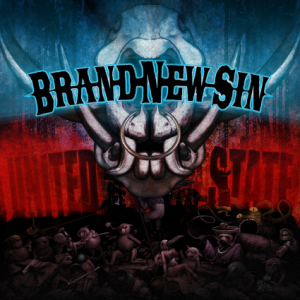 In 25 words or less: It’s a real honest, moody and raw brand of rock that Brand New Sin deliver and the key to enjoy the album is to pick your own mood when you are likely to best enjoy…

United State sees American based Brand New Sin deliver their fifth album.  If you are reading this and are from Australia, then you can be forgiven for having not heard of Brand New Sin until now… But given the type of website we are here at May The Rock Be With You, I am proud to know that you are now aware of Brand New Sin, mission accomplished!  Well not yet, I haven’t told you about this album, so read on…  Brand New Sin deliver a style of rock, at times bordering on metal, that borrows from traditional classic rock, southern rock, heavy metal and everything in between.  If one was to throw Black Label Society, Drive By Truckers, Molly Hatchet, Black Stone Cherry, Monster Magnet and Slash’s Snakepit into a blender…then you would end up with something that sounds like Brand New Sin.

United State is the second album now with Kris Wiechmann on vocals and the first with new guitarist Tommy Matkowski and sees the band stamping their authority on what is the true Brand New Sin sound.  They may now deliver a somewhat less intense and musically ferocious feel than their earlier releases, but that was then, this is now.  Monster riffs dominate the opening tracks The Lord Came Down and Know Yourself, but don’t expect to hear much in the way of a chorus on these songs, that is saved for All My Wheels which is about as accessible as you are going to get with Brand New Sin.  Rotten As Hell  on the other hand is a raucous acoustic based romp.

Elbow Grease, which title alone, really hits at the core of the real blue collar feel that seeps through in the music and lyrics of Brand New Sin.  Infamous, now did someone say The Cult haha, love the riff of this song, even if it is as close as you could get to Wildflower!  Elsewhere, there’s some real attitude on display on the likes of Goddess Of War and the swaggering Bed Of Nails and there’s another acoustic number with Travel Well (The Les Daniels Song).  Closing the album is the AC/DC cover What You Do For Money Honey, which doesn’t stray very far from the original.

United State will certainly take a few spins to digest as it did for me.  It’s a real honest, moody and raw brand of rock that Brand New Sin deliver and the key to enjoying the album is to pick your own mood when you are likely to best enjoy…and for me, that is a mood accompanied with beer!

Check it out if you like: Classic rock, southern rock, heavy metal and everything in between